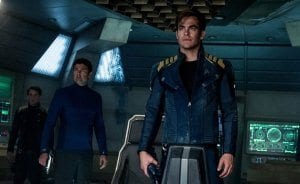 The America of Stardate 2016 is fractured. Paranoid. Raging. We’re locked into a presidential election that rejects hope and embraces fear. The vast majority of us plan to vote against a particular candidate instead of being inspired by one. Our country is beset by problems and, when we should be coming together, we seem to be moving further apart.

1966 was a year not dissimilar to 2016. We were trapped in a seemingly endless war against a foe we barely understood. Public trust in institutions was eroding. But in Los Angeles, an ex-cop and television producer named Gene Roddenberry created a Western set in space. He had worked on his concept, a re-working of the old show Wagon Train with a science fiction spin, for two years. On September 8, 1966, the first episode entitled The Man Trap aired on television.

Fifty years later, there’s no doubt that Star Trek is an institution. It spawned numerous series, multiple books, countless merchandise, and a film series with several solid entries and one perfect installment.* It embodied our highest virtues. Exploration. Curiosity. Most importantly, optimism. The newest entry in the franchise, Star Trek Beyond, may lack some of the stately grandeur of OG Trek, but it’s got optimism in spades.

Two and a half years into his five-year mission to seek out new life and new civilizations, Captain James T. Kirk (Chris Pine) is bored to tears. He must have thought, as the captain of the starship Enterprise, it would be non-stop ass-kicking. Not so much, as Starfleet has tasked him to perform diplomatic missions. Mixed in with the boredom is wistful regret. He’s just had a birthday, and he’s now older than his father was when he died. His friend McCoy (Karl Urban) tries to distract him. He needs a distraction, and he gets one.

The crew of the Enterprise is assigned to take on a rescue mission in a remote nebula. They’re attacked by a monstrous swarm of alien ships. and they crash land upon a mysterious planet. The warlord Kraal (Idris Elba, hidden under pounds of makeup) is behind the attack, and he sends his forces to round up the survivors. But a few crew members are still out there, scattered across the planet’s surface.

As is the case with most villains, Kraal is extremely angry. He resents Starfleet’s continuous expansion and despises their emphasis on unity. Now the crew must come together, with the help of the alien Jaylah (Sofia Boutella), and get to the bottom of Kraal’s dastardly scheme.

Sounds simple, right? It is, and that’s hugely welcome. In 2009, the Star Trek franchise was kinda sorta rebooted. New actors took over iconic roles in a convoluted but ultimately fun film. Then Star Trek Into Darkness was inflicted upon us in 2013. It was dark, paranoid, and deeply, deeply stupid, and it almost killed the nuTrek franchise stone-dead. Thankfully, somebody had the bright idea to bring in Justin Lin. A confident and smart director, Lin turned around the Fast and Furious franchise and replaced po-faced seriousness with muscular action and a running theme of family.

Lin has made a film that, once it gets going, doesn’t stop at all. His genius is that he’s able to weave in solid character beats amongst the relentless pacing and creative set pieces. There’s running, punching, and shooting, but that’s not all there is. The entertainingly cranky McCoy is teamed up with the stoic Vulcan science officer Spock (Zachary Quinto), and Lin knows that these two characters have a history of bouncing off one another in unexpected ways. Kirk is paired with Chekhov (The dearly departed Anton Yelchin), and it’s great fun watching the wide-eyed Chekhov hustling just to keep up with his captain.

Better yet, Lin subtly shows us the power of not only a unified crew, but a diverse crew. No longer a sea of white male faces, this crew is diverse. During a scene of shore leave, we briefly glimpse the daughter and husband of Sulu (John Cho). When Uhura (Zoe Saldana) is among those captured by Kraal, she doesn’t wait idly for a rescue from her boyfriend Spock. It looks like 21st century America, but Lin never beats us over the head with it. This is simply how things are. Infinite diversity in infinite combinations, as a Vulcan philosopher once said.

Three films in and the cast have settled into a comfortable groove. Like military personnel, they know each other’s rhythms and work well together. We’ve got a group of actors here that is not only talented but enormously likable. A few of the standouts are Karl Urban’s passionate McCoy, who’s finally given stuff to do, and Simon Pegg’s goofball engineer Scotty. While Chris Pine doesn’t have William Shatner’s weird-ass delivery, he nails Kirk’s bulletproof confidence. As Spock, Zachary Quinto makes fascinating choices. His Vulcan and human sides are constantly at war with each other, and Spock seems to just barely be holding his emotions in check.

It’s a pity that Idris Elba doesn’t have a character that’s a little stronger. He’s an actor with a big personality, and it’s easy for him to be a match for the crew on his own. But he’s buried under prosthetics, and along with an accent that’s growly and halting, some of his natural charisma is muted.

The script, written by Pegg and Doug Jung, does feel a little like an episode of the old TV show. The crew stumbles across a mysterious thing then must work together to either overcome it or understand it. That’s completely okay since it’s a self-contained adventure with room for character development and, above all, fun.

When Gene Roddenberry created Star Trek in 1966, his hope was to show the evolution of humanity. His characters were able to put aside their differences for the good of the whole. Star Trek Beyond continues that noble tradition of embracing hope. There’s no reason why more blockbusters can’t do the same, but at least we’re seeing more positivity with both the Marvel and Star Wars franchises. Now, does somebody want to tell our presidential candidates to maybe do the same?

*That would be Star Trek II: The Wrath of Khan. But you knew that already!

Tim Brennan
Tim has been alarmingly enthusiastic about movies ever since childhood. He grew up in Boulder and, foolishly, left Colorado to study Communications in Washington State. Making matters worse, he moved to Connecticut after meeting his too-good-for-him wife. Drawn by the Rockies and a mild climate, he triumphantly returned and settled down back in Boulder County. He's written numerous screenplays, loves hiking, and embarrassed himself in front of Samuel L. Jackson. True story.
See More Articles From Tim Brennan
Tagged: anton yelchinchris pineidris elbajohn chojustin linkarl urbansimon peggsofia boutellazachary quintozoe saldana
Boulder Colorado Air Quality