Home › Blog › A Brief, Chaotic History of the Flagstaff Star

A Brief, Chaotic History of the Flagstaff Star

Imagine, getting back from a long day in Denver. It’s cold, it’s dark, and there’s some minor evening traffic. Then, you ascend the final hill towards Boulder, and you’re greeted by the bright shape of a star on the mountains.

That’s the moment I wait for every November.

During Veteran’s Day last week, the star began its annual winter residency in Boulder. The star is an important symbol, and no Boulder winter is complete without the giant glowing shape on Flagstaff Mountain. It provides a little extra light in a season when days are shorter and nights are longer, and it adds to the comfortable winter atmosphere. The star wasn’t always so beloved, though, and it has gone through many different forms over the years. We’re prepared to portray the star’s history in the form of a timeline.

December 1947: The star was first introduced into Boulder as a Christmas decoration.

April 1948: the star was so popular in December, the Boulder Chamber of Commerce decided to implement it with Easter by turning it into an Easter cross. It continued to alternate between the cross and the star for nearly two decades (see eerie-looking picture below).

1951: Pranksters from Colorado A & M (known today as CSU) reconfigured the shape into an “A”.

1958: Pranksters from the Colorado School of Mines reconfigured the shape into an “M”.

1955: Someone painted the bulbs on the star red.

1956: Someone painted the bulbs red again.

1960: Four years after the last incident, the red bulbs return. The Camera speculated that this stunt was part of a communist conspiracy.

1969: Changing the color of the star was no longer cool, so rather than change the color, the shape was changed into a gigantic peace sign.

1970: Eventually, people had enough. Complaints were filed about the cross violating the U.S. Constitution’s separation of church and state, and the Boulder City Council eventually resolved the issue by banning all lighted displays on Flagstaff Mountain. People were able to accept that the cross was gone, but people weren’t happy about the possible demise of the star. Eventually, the council decided to leave the star up, because it represented a “sense of community.” 1980: The star was left on month after month as a reminder of the Americans held hostage in Iran. Environmentalists were angry about the ongoing use of electricity, however, and removed the bulbs and chopped down the wires. The majority of Boulder was very upset by the vandalism, however, and rallied once again to the star’s defense.

In short, the star is a very important symbol in Boulder. It’s been changed, vandalized, and created uproar throughout the community, but these things have made it an even stronger symbol. It’s a historic landmark, and it will continue to illuminate Boulder‘s dark winter season for some time to come. 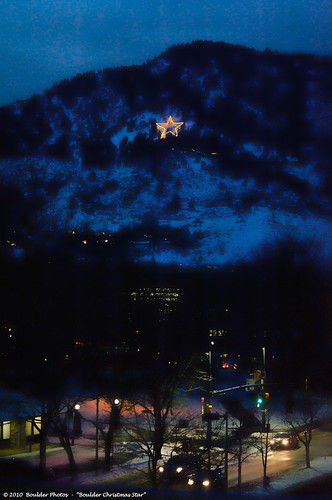