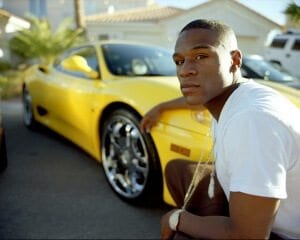 Love him or (most likely) hate him, Floyd “Money” Mayweather has proved yet again that he is unbeatable. 48-0. He is one win shy of tying Rocky Marciano’s record of 49-0. Floyd intends to tie the record in September and then retire as one of the greatest pound-for-pound boxers of all time. He is very clear about this goal. I have no doubt that he will accomplish it.

Mayweather started his professional career as “Pretty Boy Floyd” and was just a shadow in the background of Oscar De La Hoya’s spotlight. Mayweather was winning fights but he was not nearly as famous as he is now. He was not accomplishing the goals that he set out to. His goals were very clear – he wanted to be the best fighter he could be and the first “9-figure fighter” AKA he wanted to be the first fighter to make over $100 million dollars in a single night.

I have never been a huge fan of Mayweather. Or so I thought. I was adamantly rooting for Pacquiao last night. I was hoping somebody would finally shut him up.

There was no question of the outcome. It was very clear that Mayweather won the fight last night. He dominated. For anyone who follows boxing to at least some degree, Mayweather landed tons more punches and hardly got hit at all by Pacquiao. He completely controlled the fight. He controlled the ring.

This fight, just like all fights, was won outside of the ring. It is won in practice and preparation, both physically and mentally. This is why I have a newfound respect for Mayweather.

Mayweather wins his fights long before setting foot in the ring. His greatness is in his mentality. He does not just believe he is going to win. He knows it. He has absolutely no doubt. This does not mean that he relies entirely on his mind. He definitely trains his butt off, but the mental game is what makes him unbeatable. In boxing and in business

Boxing ability aside, Mayweather definitely understands the “money” side of boxing and there is absolutely no denying that he is one of the absolute best promoters EVER. Period. Nobody has accomplished what he has OUTSIDE of the ring, much less inside of it.

Mayweather made close to $180 Million dollars last night. This was not by accident. His formation of his company, “Mayweather Promotions” is all about “money”. It is very clear. Look at his nickname. This has been his master-plan all along. He knew he needed to break free from De La Hoya’s brand and create one for himself. So he did.

Mayweather recognizes the business of boxing and pointed out last night that he is an “entertainer” and everything he does is to “to sell tickets”. He sees the big picture. He knows that boxing is entertainment and the whole goal is to sell more tickets.

Mayweather knows how to make money. He knows what people want and what they are willing to pay for. That in itself is amazing from a business perspective but to ALSO be able to go out and be the performer, is even more incredible.

Mayweather’s legacy is a lesson for all of us. He has 2 goals that he is 100% committed to accomplishing and you can tell that nothing in the world is going to stop him. The first one is to be the best pound-for-pound boxer of all time. His record pretty well speaks for itself in this regard. His second goal, to be the first boxer to make 9-figures in a night was already accomplished. What else does he have accomplish?

You can call him whatever you want. You can hate the idiotic things he says on camera. You can call him cocky, arrogant and conceited. All of those might be true, but the one thing you cannot call him is “beatable”.