When Feelings Have Feelings 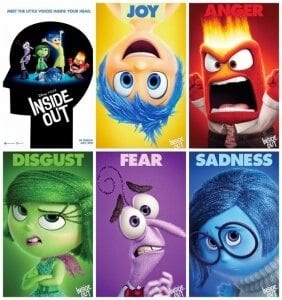 My wife is a great deal smarter than I am. To anyone who knows me, that’s a statement as obvious as “water is wet” and “walls hurt when you run into them.” But a while back, she made a comment to me that children’s literature has a much higher quality bar than adult literature. Kids have a natural B.S. detector, and will usually reject something of low quality, while adults make hacks like Stephanie Meyer and Dan Brown rich.*

We saw that last year, with the release of The Lego Movie, a “children’s movie” that’s easily in 2014’s top 10 and is arguably the best film of that year. This year, it’s proven again with the latest film from Disney/Pixar, Inside Out, possessing intelligence, wit and blazing creativity.

12 year old Riley (Kaitlyn Dias) is a girl living in Minnesota. She loves her Mom (Diane Lane) and Dad (Kyle MacLachlan), she loves playing hockey, and she’s having a pretty idyllic childhood. All of that changes when the family movies to San Francisco because of Dad’s new job. Now, she must learn to adjust to a new home, new school, new life. That’s what happens on the outside, anyway.

Inside Riley’s head is Headquarters, the command center that helps her navigate through life. The team running Headquarters are the emotions Joy (Amy Poehler), Sadness (Phyllis Smith), Disgust (Mindy Kaling), Fear (Bill Hader) and Anger (Lewis Black). They all work together to keep Riley safe and happy. Joy tends to be the dominant emotion, and whenever possible, she tries to minimize the influence of Sadness.

After arriving in San Francisco, Riley’s not happy. She misses everything about Minnesota, which means Sadness starts gaining more control. After Sadness begins accidentally tainting previously happy memories, she and Joy squabble. During the tussle, Joy and Sadness are sucked out of Headquarters, leaving Anger, Fear and Disgust in control.

While Riley struggles, Sadness and Joy try to find their way back. Along the way, they’ll explore the landscape of the mind, including Imagination Land, Long Term Memory Storage, and the Train of Thought. They also encounter Bing Bong (Richard Kind), Riley’s imaginary friend and a character that’s utterly innocent and enormously heartbreaking.

Pixar’s first film, 1995’s Toy Story, helped to establish the animation studio as a place all about quality projects. For a while that changed, with their overreliance on sequels and some truly dodgy films.**But co-directors/writers Pete Docter and Ronaldo Del Carmen are breathtakingly ambitious. They’re getting across some pretty heavy psychological and philosophical concepts, and they do it with grace. Docter and Del Carmen are examining the processes of how we think, why we remember things the way we do, and how it’s an experience that’s truly universal.

The film is also powerfully emotional and incredibly suspenseful. So far this summer, we’ve had movies with dinosaurs running amok, a murderous robot trying to end humanity, and a cataclysmic earthquake. Here, we’ve got the emotional life of a single girl. While they’re the lowest stakes, they couldn’t be higher. Going through childhood, all of us have experienced transformative events. A move, the death of a pet, the end of a friendship. Riley’s a good kid, and we can all empathize with where she’s coming from. As we see core elements of her personality crumble, there’s huge tension. We want her to be okay.

The icing on the cake is the outstanding voice actors. While everyone is great, there are a few that stand out. Amy Poehler’s Joy is kind of/almost exactly like her Leslie Knope from Parks And Recreation. Joy is relentlessly, almost psychotically cheerful. But Poehler’s role is the connective tissue of the film. Not only is Joy the dominant emotion, but it’s powerful when Joy learns about the value of sadness, and Sadness. Poehler and Phyllis Smith’s Sadness play off of each other marvelously. And Richard Kind’s Bing Bong…wow. His performance is just lovely. It’s goofy, childlike and filled with goodwill.***

As viewers we’re so lucky. Pixar isn’t a studio that makes films just so they can sell merchandise. With Inside Out, they’ve not only made a film of staggering ambition, but they’ve also created an empathy machine. Stay through the credits, and you’ll get a brief glimpse into the personalized Headquarters of a number of other characters. We see that, while everybody perceives and deals with the world in different ways, we all have emotions coming from the same place.

* There’s always exceptions when it comes to taste. The previews I saw before Inside Out looked absolutely godawful, and there are kids who desperately want to see Hotel Transylvania 2. Parents, your job is to help your kids develop good taste. Do your job.

**Yes, Cars, I’m looking at you. Also, is Cars the logical end result of the murderous computer program Skynet from the Terminator films?

***I’m warning you now, Bing-Bong will make you cry. Get ready. If for some reason you don’t, stay away from sharp objects, because you’re officially a sociopath.

Tim Brennan
Tim has been alarmingly enthusiastic about movies ever since childhood. He grew up in Boulder and, foolishly, left Colorado to study Communications in Washington State. Making matters worse, he moved to Connecticut after meeting his too-good-for-him wife. Drawn by the Rockies and a mild climate, he triumphantly returned and settled down back in Boulder County. He's written numerous screenplays, loves hiking, and embarrassed himself in front of Samuel L. Jackson. True story.
See More Articles From Tim Brennan
Tagged: amy poehlerbill haderinside outlewis blackmindy kalingpete docterphyllis smithrichard kindronaldo del carmen