Why Name a Lady Buffalo “Ralphie”? 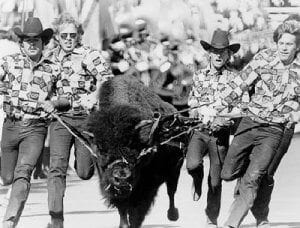 Ralphie I taking the field with her handlers.

This title question, and the more general “Why a buffalo for a mascot?” answered below. Time to brush up on Buff history.

Ralphie is the female buffalo mascot for CU Boulder. But why does this female buffalo sport a male name? And why did CU choose a bison mascot in the first place?
The tradition began in 1934 when the university newspaper selected “Buffaloes” as the nickname for the university students. Three weeks later, a few students paid a rancher $25 to rent a bison calf and a cowboy to handle her. The calf had to be managed by all 4 students plus the ranch hand at the 7-0 winning game at University of Denver. 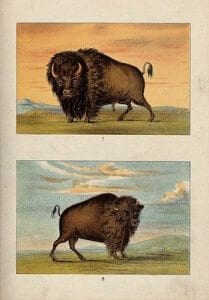 Bison appeared occasionally at CU games after that, sometimes in pens and sometimes driven around the field in cages. In the 1940s CU got its own baby bison and kept it in a pen at the University Riding Academy. This little buffalo was not the first official mascot though. That title goes to “Mr. Chips,” the buffalo who first premiered at the 1957 CU Days kickoff rally. Mr. Chips was cared for by a men’s honorary.

The first Ralphie was donated to CU in 1966. The bison was originally named Ralph, because that’s the sound it made while running. But, one student from Delta Delta Delta pointed out the female anatomy of the little buffalo. So the name was changed to Ralphie… Because that was more feminine in their minds (we assume).

But, why a female buffalo? Well if you’ve ever seen a male bison, you may understand. Females are smaller and far less aggressive than males. When it comes down to it bison are wild animals, 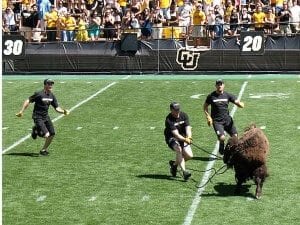 and it’s easier to handle a smaller animal. The trained Ralphie Handlers still have to wear her out before a run through the stadium. Without pre-exhausting her she would be much harder to direct around the football field.

Ralphie I served from 1966-1978. CU is now at Ralphie V, a feisty addition to the line of spunky female buffalo which have given CU national attention.

We hope you have a bit more appreciation for the Buffs and their mascot today. Like us on Facebook and leave comments or questions below. Have a great day!