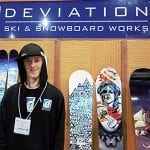 Nick is in love with the ski and snowboard industry. Ever since moving to Boulder a couple of years ago, he has loved the laid back culture and positive vibes that surround the ski and snowboard world. When Nick was hired by Deviation, a Denver based ski and snowboard company, he told me he couldn’t have been happier. He became a sales rep for them and was delighted with the pleasure of representing Deviation at the 2017 SIA Snow Show. Nick obviously showed a passion for the sport and a bond with those who practice it. He was more than happy to tell me all about Deviation’s missions... Read More