The Nuggets Get Swept – But in Their Defense… 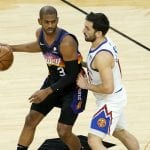 The Denver Nuggets season came to an abrupt end following Sunday’s 125 -118 loss to Chris Paul and the Phoenix Suns.  The Suns swept the series in four games as Devin Booker, Paul, and a cast full of others dominated the undermanned Nuggets from start to finish. Paul finished with 37 points on 14 of 19 shooting as he continued to dominate the Denver guard trio of Monte Morris, Austin Rivers, and 5’10 Facundo Campazzo.  Booker added 34 points and 11 rebounds as he took advantage of the absent and injured Jamal Murray.  And a frustrated Nikola Jokic was ejected in the third quarter after a... Read More