Speak Your Truth – Never Settle, Stay True to Yourself, and Thrive 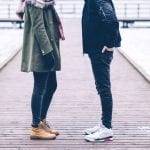 Since I moved into my Airstream, I hang out daily at Whole Foods (eating the salad bar and borrowing precious Wi-Fi). As a self-proclaimed blogger (I don’t know how many blogs it takes to clearly own that title), I like to spend most of the time writing. I find that it’s ironically easy for me to focus amongst the lunch crowd chaos. Today, I painfully watched a couple with two kids absolutely annihilate one another with their words. In public. And, my heart was so soft to their experience that I literally wanted to cry. The wife is pushing the two kids in one of those car-shaped shopping carts... Read More

The Sound of Silence

Never shall I forget the little faces of the children, whose bodies turned into wreaths of smoke beneath a silent blue sky. Elie Wiesel wrote that, in his astonishing memoir Night. He survived the Holocaust, and he later wrote about how his faith was consumed by flames. Who can blame him? He, and millions like him, cried out to God in the ghettos, the box cars, the gas chambers. They called out for mercy, justice, retribution. Was God listening? Perhaps. It’s a common theme. Atrocities and disasters take place, and we often wonder. We wonder if God was in Windows on the World on September... Read More