Home › Blog › History of Boulder › Boulder and the Gold Rush

Boulder and the Gold Rush

Up until 1858, few people from the East Coast had any interest in the area that would one day be the state of Colorado. It was not until the Pike’s Peak Gold Rush that settlers came to the region and laid the roots of the town that would become Boulder.

Even though small amounts of gold were discovered in Colorado as early as 1850, they went largely ignored; the country was too caught up in the potential wealth to be had in the California Gold Rush. But when the gold of California was exhausted, heads began to turn towards Colorado–or what was then known as the Kansas Territory.

The gold rush truly began in 1858, when members of a Cherokee tribe discovered traces of gold in the South Platte River. News of what they had found eventually reached William Green Russell, a Georgian who was married to a Cherokee woman. While Russell was originally more interested in mining in California and made several trips there with his brothers and his wife’s relatives, he ultimately returned to Colorado and began the area’s gold rush in earnest in 1858.

The discovery of gold in present day Cherry Creek and Englewood lead to the founding of Denver a mining town. Boulder itself was established a year later, providing would-be miners with supplies, saloons, and trading posts before they went on to Clear Creek, South Park, Breckenridge, and other areas rich with gold.

Over 100,000 came to Colorado to seek their fortunes between 1858 and 1861, prompting the U.S. government to create the Colorado Territory. “Pikes Peak or Bust!” became the rallying cry for the newcomers, known as the 59ers. Most of them were young men who had fallen on hard economic times from the East Coast, though some came from as far away as Ireland. Their lives in search of riches were often harsh, isolated, and full of dashed hopes. “Have not been at work this day been mending some. Slept some Have thought of home and of those at home today all the time. It has been a long and lonesome day,” wrote one prospector in his 1859 diary. 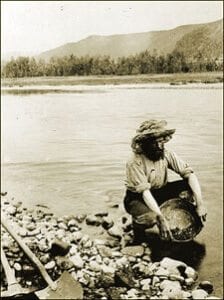 Many of those seeking their fortunes in Colorado eventually returned to their homes and families when the gold became less plentiful, leaving dozens of once booming mining and supply towns vacant. But there were other resources in Colorado that they could take advantage of as miners. Coal was discovered in Boulder and Lafayette, as well as in multiple towns deeper in the Rocky Mountains.

While time has mostly erased Boulder’s origins as a mining town, it is safe to say that without the gold of Pike’s Peak, Boulder would not exist as we know it today!