Boulder Panhandling Laws Given Some Change

The American Civil Liberties Union of Colorado filed a lawsuit against an anti-panhandling ordinance approved by the city of Grand Junction, CO. Last week, the ordinance was found to violate the First Amendment rights of people asking for financial assistance. Even though the ordinance should have applied to Girl Scouts asking donations, street musicians, and Salvation Army bell ringers, the main target appeared to be the homeless population. 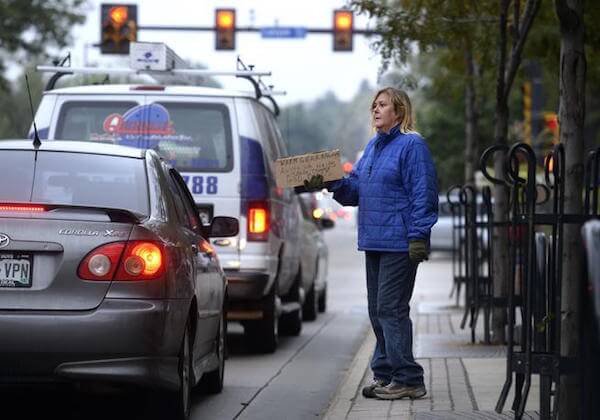 Attorney Tom Carr proposed that the city of Boulder tweak its panhandling laws in accordance with the recent suit against Grand Junction. These laws restricted panhandling on Pearl Street and the University Hill. The laws against “aggressive begging” were also up for revision. The ACLU argued that Grand Junction’s laws were worded too broadly to prevent the mistreatment of homeless panhandlers. Carr suggested that the language of Boulder‘s laws be refined to only forbid begging which is “intimidating, threatening, coercive or obscene and that causes the person solicited to reasonably fear for his or her safety.”

According to the city of Boulder there have been 5 citations issued for “aggressive begging” but there have been no citations issued to anyone on the Pearl Street Mall nor the University Hill zones. Still, the city was wary of its law’s wording due to the political attention Grand Junction received. Tom Carr pointed out that “keeping these provisions in place would open Boulder up to legal challenges”. The city council meeting on Tuesday, October 6 was focused on preserving Boulder‘s reputation as a humanitarian entity.

Yesterday, the panhandling laws for Pearl Street and the University Hill were swiftly changed. The ordinance previously prevented begging in these areas. People were not allowed to ask financial assistance with 10 feet of an outdoor patio area, food cart, or wall on Pearl. They were also banned from begging within 5 feet of a wall throughout the rest of Boulder‘s downtown area and the University Hill. These measures have been lifted from the law, and the wording for “aggressive panhandling” now reflects the ACLU’s definition from the Grand Junction case.

There is a broader lesson to be learned from this lawsuit. “Deviant” and/or criminal behaviors are often the actions the poor have performed for centuries. Panhandling, like theft, is a survival tool for those in desperate need. As conscious citizens in a democratic system, we ought to support non-violent means for people to live off of other’s generosity, so that they never have to resort to things like theft or violence just to make it through the night.

Joe Inclan
Originally from Lone Tree, CO, Joseph Inclan graduated from Regis Jesuit High School in 2010. He applied to just two universities, DU and CU Boulder, and was accepted by both. Joe chose CU for its beauty, and the appeal of the open-minded and quirky city ensured him how right he was to choose Boulder. With a Bachelor’s degree in both English Creative Writing and Philosophy from CU, he has dabbled in everything from poetry to basic technical articles for 3DPrintingIndustry.com. His hobbies have a range too, from fountain pens and handwriting, to yoyos and skill toys. The most important thing for Joe is to understand things complexly. Boulder and its residents live in an evolving miasma of ideologies and cultures which demand more than a 2-Dimensional perspective. Joe’s fascination with Boulder stems from the fact that it is far more than the sum of its parts, and that is a unique quality. He is glad to be a writer with AboutBoulder.com and looks forward to spreading his knowledge of Boulder with the community.
See More Articles From Joe Inclan
Tagged: About BoulderaboutboulderABOUTBoulder.comACLUboulderboulder coloradoBoulder Countyboulder eventsColoradocommunityhomelessInspirationlocalordinancepanhandlingpearl street
Boulder Colorado Air Quality