Boulder Radio Pirates Stuck it to the FCC

Did you know one of the best ways to run a pirate radio station was devised right here in Boulder? Brace yourselves for a tale of determination, censorship, gestapo tactics, and global inspiration.

The founder of KBFR (Boulder Free Radio) was a man who called himself “Monk”. He had purchased a load of Low Power FM radio broadcasting equipment in 2000, with the expectation that the Federal Communications Commission would grant him a license. He soon found out that changes to FCC regulations meant that no one in the Boulder area would be given licenses for radio broadcasting. Monk had the equipment, and the desire, so he decided to become an unlicensed, underground radio DJ in March, 2000.

Monk partnered with a man by the alias “Sparky”. Sparky was an electrical engineer with years of pirate radio experience and he became the station’s RF engineer. Setting up in Monk’s rented basement space the team started broadcasting with a library of MP3 files. This went on for about 5 months. Then, the FCC left a notice at the door of the home from which the two were broadcasting. The “Notice of Apparent Liability” threatened the station to show a valid license or face charges of up to $11,000 per day and one year in prison. Monk shut the operation down promptly, and was kicked out of the rented basement by the home’s owner. 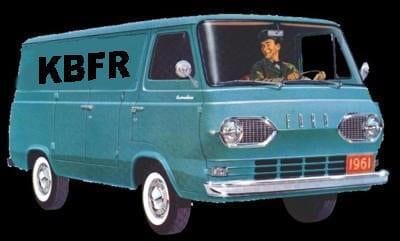 Instead of feeling sorry for themselves, Monk and Sparky bought a van. Once they had a van, they found a local business with studio space available in their building. They asked to rent the studio, as well as a parking space in the building’s lot. Once they had both, they put the FM transmitter into the van and parked near a tree. They ran the transmission antenna up the tree about 15 meters (50 feet). Locked inside the van was a 2.4 GHz broadband receiver designed to pick up signal from the studio. The studio sent their programs (mostly MP3 files) from a 2.4 GHz transmitter through the walls of the building, out to the van’s receiver, and up the antenna to be broadcasted on FM. KBFR was back in business.

Since the pirate radio station had not stopped, the FCC returned, this time to the building where Monk and Sparky had their studio. The building owner showed the (legal) studio to the FCC, as well as the (unlicensed) transmitter of the van in the lot. Since the building owner had no access to the van’s locked and hidden contents, all the FCC could do was post another “Notice of Apparent Liability” for “Monk and Sparky” on the vehicle.

The radio pirates consulted with some lawyers (who were fans of KBFR). They learned that since the FCC was leaving a notice at a new location, the time allotted for the pirates to produce a valid license had reset. The lawyers also said that due to a lack of funds, the FCC would just keep leaving notices if they found the same antenna moved again. So, Monk and Sparky decided to just keep the transmitter and antenna on the move. Where most pirate stations went quiet after the first notice from the FCC, Monk and Sparky kept up their station until January 2006.

So how did they pull off this long-lived piracy? The system consists of 3 parts: The “Transmitter Site”, a streaming audio server, and an internet-streaming radio station studio somewhere in Boulder. The “Transmitter Site” is a weatherproof box containing an internet-connected laptop, an FM transmitter, and a cable connected to an antenna. KBFR listeners would volunteer to have this piece placed on their roofs or in their yards and KBFR paid for them to connect it to the internet service. The second part, the streaming audio server, would simply ‘stream’ a free internet-based radio program to any computer accessing it through the KBFR website. The third part, the radio studio, was set up somewhere in Boulder, typically miles from the transmitter. The only illegal part of the system, the Transmitter Site, was typically found by the FCC every 10-12 months. They would talk to the homeowner who was hosting it and have them disconnect it. This was the only thing the FCC could legally do, since removal of the transmitter was impossible given that it didn’t belong to the homeowner. Afterwards, the homeowner would contact KBFR and they would move the transmitter to another location and begin all over again. The station grew to about 50 DJs and would hold occasional benefit concerts to support itself. Now, KBFR’s method of pirate radio is being copied all over the world.

The pirate station was eventually abandoned due to the ruthless tactics of Jon R. Sprague, the principal agent of the FCC during all of KBFR’s broadcasting days. Sprague tracked down the vehicle of one DJ called “Beerguy”. He went to Beerguy’s employer and told him that Beerguy was breaking the law with his radio work. Despite having no legal connection to KBFR’s transmitter site, or even knowing where it was, Beerguy received the infamous “Notice of Apparent Liability”. In addition, Sprague hunted down a former roommate of Monk’s, and accused him of being Monk. This forced the man to take a legal stand against the FCC. Monk decide that if the FCC was going to threaten and harass people only vaguely, and not legally, connected with KBFR, that he would stop the station in order to protect the innocent.

KBFR has had several attempts at revival, but has never been successful, and Monk has moved on from radio pirating. But what KBFR left behind was a legacy of creativity and civil disobedience. This story is one that Boulder should be proud to acknowledge. This free radio station boldly took on what it saw as unnecessary regulations, and brought happiness to thousands of listeners for years on end. Whatever the odds, whatever the obstacles, human ingenuity and cooperation can topple any goliath set in its path. Have a great day Boulder, and thanks for listening.

You can still listen to the internet version of KBFR here. Check out Monk’s blog here. Give us a like and share on social media. We really do appreciate it.

Joe Inclan
Originally from Lone Tree, CO, Joseph Inclan graduated from Regis Jesuit High School in 2010. He applied to just two universities, DU and CU Boulder, and was accepted by both. Joe chose CU for its beauty, and the appeal of the open-minded and quirky city ensured him how right he was to choose Boulder. With a Bachelor’s degree in both English Creative Writing and Philosophy from CU, he has dabbled in everything from poetry to basic technical articles for 3DPrintingIndustry.com. His hobbies have a range too, from fountain pens and handwriting, to yoyos and skill toys. The most important thing for Joe is to understand things complexly. Boulder and its residents live in an evolving miasma of ideologies and cultures which demand more than a 2-Dimensional perspective. Joe’s fascination with Boulder stems from the fact that it is far more than the sum of its parts, and that is a unique quality. He is glad to be a writer with AboutBoulder.com and looks forward to spreading his knowledge of Boulder with the community.
See More Articles From Joe Inclan
Tagged: About BoulderaboutboulderABOUTBoulder.comboulderboulder coloradoBoulder CountyBoulder Free RadiobroadcastingbusinessCollegeColoradocommunitycontemporaryCUFCCfree radiohistoryillegalInspirationJon R SpragueKBFRlocalMotivationmusicpiratepirate radioprotestradiorebellionrebelsSuccess
Boulder Colorado Air Quality