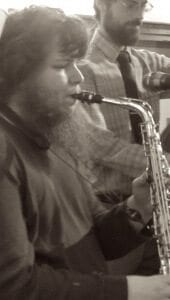 Jeremy is big part of the Boulder Swing scene. Although he plays other instruments, you’ll see him most comfortable as a sax player His young musical memories are listening to Big Band music with his grandfather and falling asleep to the sounds of Glenn Miller, Louis Armstrong and Slam Stewart.

Jeremy plays music almost every night with his own bands and others. You can see him at the No Name bar, Waterloo, Kakes Dance Studio and at License #1 when he sits in with Banshee Tree.

He likes the fact that there is a small underground swing scene in Boulder and hopes it continues.

A quiet and unassuming guy offstage, he is a cool cat onstage.  Writing and composing original swing music, he just wants his music to communicate how he feels.

He told me he has a new album coming out on May 7th and they are doing a planned impromptu performance on the Pearl Street Mall that afternoon from 4 to 6. From what I’ve heard, it will be a swinging good time!