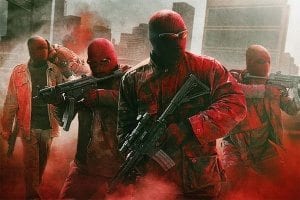 Heat changed a lot of things. Released in 1995, it was a sprawling crime saga pitting obsessive cop Al Pacino against clever thief Robert De Niro. Watching it, you’ll have a lot to enjoy. A ridiculously talented cast. Highly precise action scenes. Existential musings found within a labyrinthine plot. It’s probably the best thing writer/director Michael Mann has ever done. In its DNA, you can see strands of Reservoir Dogs, The Getaway, and Charley Varrick, to name a few.

But Heat is the platonic ideal of what the modern heist film should be. We see echoes of it in films like Sicario and Inception. Frequently, we have a potentially unrealistic expectation that crime films should live up to the heights of Heat. Triple 9 sure as hell doesn’t. Don’t get me wrong, it’s…okayish. But given the caliber of talented folks involved in this film, it should be better than okayish by a country mile.

It starts strongly, with the robbery of an Atlanta bank by a group of coordinated thieves. Easily the best set piece in the film,* we’re introduced to Michael Atwood (Chiwetel Ejiofor), a former special operative turned current bank robber. He’s intelligent and professional, and he’s backed up by Russell Welch (Norman Reedus), his partner and getaway man. Corrupt cops Marcus Belmont (Anthony Mackie) and Jorge Rodriguez (The great Clifton Collins Jr.) are along to provide muscle and police intelligence. Russell’s brother Gabe (Aaron Paul), a recovering junkie, rounds out the crew. The robbery sequence is dynamite, as we follow the team through the heist, the getaway, and complications caused by the explosion of a dye pack. So far, so good.

It turns out the real target of the heist is a specific safe deposit box. Irina Vlaslov (Kate Winslet), a higher-up in the Russian mob, is calling the shots, and as criminals so frequently do, she changes the deal. Michael’s team won’t get their cut of the bank robbery until they pull another job. Irina has leverage over Michael since he has a son with her sister Elena (Gal Gadot), and she’s holding the kid hostage. So what’s the other job? Glad you asked. The team must break into a Homeland Security building and swipe sensitive data.

In order to buy enough time to pull off the job, the team needs a distraction. A big one. 999 is the code for “officer down,” and the idea is that if a cop is killed, the entirety of the police force will mobilize and they’ll fail to notice the other huge crime going down. So who’s the lucky target? That would be Chris Allen (Casey Affleck), Marcus’ new partner and a cop Who Just Wants To Make A Difference. The team, unfortunately, doesn’t take Jeffrey Allen (Woody Harrelson) into account. He’s Chris’ uncle,** a legendary detective, and he’s on the crew’s trail.

The problem is, a movie should never make you want to watch a different and better movie instead. If I want something involving the Russian mob, I’ll pop in Running Scared or Eastern Promises. If I’m looking for high-octane sleaze, I’ll give Sabotage a watch. When I watched Triple 9, I kept thinking, Wow, it’s been a while since I watched Heat. I should totally watch Heat. I wish I was watching Heat right now. Triple 9 isn’t compelling enough to make me forget about its parentage.

It should be, though. Director John Hillcoat has made a name for himself with morally murky crime films like The Proposition and Lawless. He makes films about men willing to either compromise or put aside their principles entirely. There’s a lot of that here, to be sure. The jangly energy only really comes to the surface in action scenes, where people are either shooting or being shot at. That’s a shame because that’s taking the easy way out. Hillcoat seems to be straddling a line. On one side is a serious crime film about how law enforcement can’t afford high-minded ethics to survive and how crooks need high-minded ethics to keep going. On the other side is a cartoonish heist flick with big action and wild characters. Either choice is fine, but Hillcoat wants it both ways and won’t commit to a direction. He’s not well-served by Matt Cook’s obvious screenplay.

His cast is uniformly excellent, but they’re not all in the same movie. Woody Harrelson and Clifton Collins Jr. know the heart of the film is goofy and pulpy, and they adjust their performances accordingly. Michael K. Williams has an entertaining scene as a drag queen. But everybody else thinks they’re appearing in a tough-minded film. As usual, Chiwetel Ejiofor is excellent. Casey Affleck, whom I usually love, chews gum. A lot. With great insistence and enthusiasm. Kate Winslet’s Irina is the iron fist in the velvet glove, and she misses an opportunity to make the crimelord role memorable.***

Triple 9 ain’t bad, but it ain’t good enough. If only Hillcoat and his crew had pushed harder, had been able to marry those two tones, had been able to utilize the full potential of the overqualified cast, he’d have made something we’d be talking about 20 years from now. If only.

*It’s never a good sign when a movie has a kickass set piece early on that it can’t top later. One of the prime offenders of that is the amazing plane rescue sequence in Superman Returns. It’s really the only reason to watch that film.

**I swear to God, this flick has so many biological connections that you need a family tree for reference.

***The Counselor is one of the worst films of the 21st century, but Cameron Diaz gives a performance that’s so berserk that you have to admire the audacity of it. Winslet needed more of this madness.