The film follows Kyle through four tours in Iraq and Afghanistan, one marriage and two kids. Cooper’s been receiving a ton of praise for his performance, and I can promise that he does deliver the goods. While it’s not the best performance of the year (that would be Jake Gyllenhaal in Nightcrawler, and boo to the Academy for snubbing him), he did make me misty-eyed once or twice. 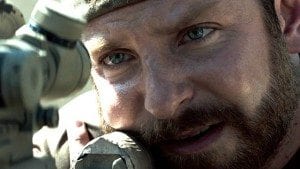 What I said about the video game is true. Twice in two separate scenes, US troops were under fire while standing next to red barrels. Everybody knows that red barrels are explosive, so I was just waiting for a stray bullet to strike one. No such luck.

The best parts of this movie are the scenes before, after, and between Kyle’s four tours. All the military action stuff is a little clichéd and predictable, and it’s exactly clear what director Eastwood’s opinion about the war is. The non-war stuff is where we get to see Kyle as a lost soul, which will bring to mind The Hurt Locker, and the “you only love one thing when you’re a grownup” speech.

Interestingly, Cooper is the only star in this movie. I imagine most of the budget went toward buying camouflage pants and helmets. But it’s unusual to see such a highly-acclaimed movie with mostly-unknown actors.

The best scene in the movie is when Kyle stares at his daughter in the neonatal intensive care unit. His newborn is crying, and he’s powerless to help her. The post-war treatment works here, with subtle references to PTSD and difficulty coming home.

I only wish there would have been more of that, and less camouflage and spent shell casings. Still worth seeing for Cooper, though.