First of all, let me say how hard it will be to review this movie without spoilers, since it’s a plot-twist-apalooza spoiler minefield. But here we go:

Nick and Amy Dunne live in suburban Missouri, a couple settled in to mid-marriage unhappiness. Their lives haven’t turned out the way they predicted, but things are about to flip upside down when Nick comes home to a ransacked house, and the police investigation into Amy’s disappearance begins.

I can’t say more without spoiling too much, so I’ll cut the synopsis there. 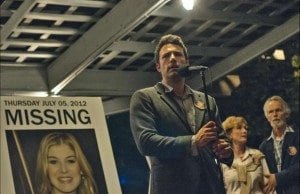 Fresh off my own review of the book, I’m not sure how I feel about this movie. It’s getting great reviews and awards-season buzz already, but there were things that bothered me that I’m not sure how to reconcile. Let’s break it down into pieces:

Based on my objective analysis, it would seem that the Pros beat the Cons by a score of 5-3. So I must conclude that I liked it. And I think you will too, especially if you haven’t read the book. Just don’t let anyone spoil it for you.

Gone Girl is playing at the Century Boulder Theater