Bob Saginowski doesn’t take communion. Bob tends bar, but some Brooklyn gangsters also use the bar as a funnel for drops… places they temporarily store ill-gotten money before stashing it somewhere else. But Bob doesn’t think he’s connected to that underground world; he thinks he’s left it far behind.

Just as he did in the woefully under-appreciated movie Warrior, Tom Hardy once again shows how adept he is at characterizing a range of emotion through a subtle performance. His lips barely move for most of the film, but we can read his face and feel the full brunt of Bob Saginowski’s angsty angstiness. Bob fears being alone because of the things he’s done in his old life, and the guilt won’t allow him to take communion. 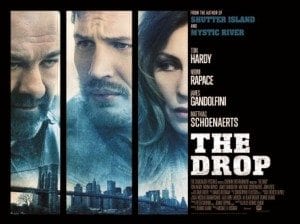 In his final film role, James Gandolfini shines as Bob’s cousin . It’s hard not to feel sad watching him up there, obese and wheezing, knowing that there’s no more Gandolfini after this. When I think back to The Sopranos, it’s such a testament to the actor’s charisma that I empathized with and rooted for Tony Soprano, who was not exactly a good person. Just a hair below Walter White.

The Drop is swathed in a dreary color palette. Browns, navy blues, dirty yellows. The film takes place in the deep of winter, and even the few rare sunny scenes depicted still reek of melancholy. The tone recalls Godfather II-era so much that I felt a little surprised when Noomi Rapace whipped out her iPhone in one scene to snap a picture. Without the phones and modern cars, this easily could have been 1977.  A very dreary 1977.

But there is an adorable pit bull puppy who acts as frequent scene-stealer to counteract the dreariness. Hard to take your eyes off the totes adorbs slobbering little creature.

What this movie does well, aside from some meaty scene-chewing from Hardy, Rapace, Gandolfini and a cute dog, is instill a great sense of foreboding and creeping dread. There isn’t much action or violence throughout, but a growing tension that will clench your jaw and strain your neck as it propels you toward the climax.

It’s a worthwhile movie, but don’t expect anything uplifting. Except the puppy. Because d’aww, he’s just so cute.

The Drop is now playing at Century Boulder theater.