The Maze Runner: Teenagers in Trouble

This weekend, I had a choice between Maze Runner and A Walk Among The Tombstones, a gritty thriller in which Liam Neeson plays a new, totally non-Taken character.

I chose the Maze Runner, and this is my story.

My favorite part of the evening may have been the trailer for Interstellar, the Christopher Nolan/Matthew McConaughey Oscar-bait film coming out later this year. Man, that looks exciting. I can’t wait to hear the time-is-a-flat-circle-in-space monologue.

Anyway, Maze Runner (with no spoilers). 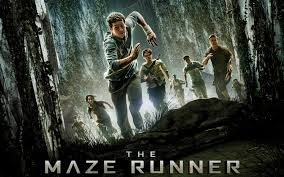 The Maze Runner isn’t half bad. Teenagers trapped in a maze for mysterious reasons, struggling to escape while spider/scorpion monsters stalk them and dissension spreads among their ranks. Think Lord of the Flies with cyborg monsters.

What it does well, it does very well. The movie opens with a frenetic and panicky feeling, which it manages to revisit during the action sequences. And there are a nice number of quieter, dialogue-driven scenes to balance out the big set pieces.

Much of the acting is good, especially Thomas Sangster (Jojen Reed from Game of Thrones). The dialogue, while a little too heavy on the vernacular and terminology (Klunk. Glader. Griever. WICKD. Shank. Greenie), feels authentically-teen while also not pandering or devolving into catch phrases.

But there were also many things that annoyed me. During the nighttime action sequences, what’s happening and who’s doing it all turns blurry. I’m not normally one to scorn shaky cam, but this movie has way too much of it.

Our hero, Thomas, is a testosterone-fueled fish out of water. His take-charge attitude seems ludicrous at times, but I’m sure he’ll look great on the cover of Tiger Beat. Do kids still read Tiger Beat? I have no idea.

A character poses the movie’s question early on: “Why are we here, trapped in this maze?” And that question is eventually answered in an M. Night Shyamalan-y twist at the end, and that’s what bothered me the most. The explanation is paper-thin. The kind that will have you puzzling over it on the way home from the theater, and not in a good way. It leaves a lot of room for a sequel, and maybe it will all make sense later on in the trilogy. Here, it just didn’t work for me.

Your little sister who loved the books will enjoy it, and it’s fun for a popcorn movie full of thrills, but I wouldn’t go into it looking for much logic.

The Maze Runner is now playing at Century Boulder theater.