There was a time not long ago that recovery devices for endurance athletes were limited to sticks, foam rollers, ropes, and some good-old-fashioned stretching mats. If it were up to most, this recovery routine would not have changed because it seemed satisfactory enough. But for Jeremy Nelson, the inventive runner behind the “R8” ROLL Recovery device, those tools belong to the past, while the “R8” is the revolutionary recovery tool of the future (and the now!).

The “R8” invention emerged from a perfect storm of Nelson’s passion for running, strong education, perseverance, creativity, and an unfaltering desire to help other people with similar goals: recovering well to compete and train at their best. Nelson was talented enough to run for Colorado State University during his undergraduate career while studying mechanical engineering, immediately continuing his education at Stanford to earn a Masters in Product Creation. These experiences prepared him for his genius and generous contribution to the world of endurance sports: a device that is now sold in every speciality running store in Colorado, and is making it’s way into about 300 stores across the country. The R8 was also named one of Men’s Journal’s “Gear of the Year” in 2013, and has since been featured in Runners World Magazine, Competitor Magazine, Running Times and more. 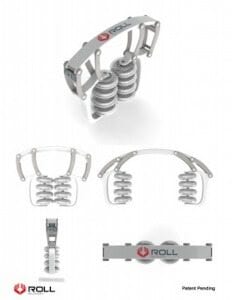 R8 (pictured above): What is the tool and what makes it so special? Well, it’s an easily transportable and compact device used to roll out sore legs. The R8 was “developed to reduce inflammation after workouts, breakup muscle adhesions and stimulate blood circulation”. The major goal of ROLL Recovery is to: “design and build revolutionary products to help people recover faster and improve the quality of their life” –Roll Recovery.

Company: Nelson revealed that he constructed the first successful version of the R8 in his own garage, after about a year and a half of attempts that were not quite right. “Not quite right” for Nelson means anything short of absolute perfection. Andy Wacker, professional runner and employee of Roll Recovery, also spoke to the standards that each device must be held to before they are sent out: “We carefully check every single tool and make sure nothing is wrong with it before it’s shipped or sent to a store. This is a huge part of the company, especially considering there are only 7 of us and we are all professional runners!” The business relies heavily on the passion of its few employees to ensure the highest quality of product, while also having an understanding of the demands that are involved with competing at the elite level. Wacker stressed the importance of the business being located and founded in Boulder, where so many endurance sporting events occur, allowing for frequent expos and community involvement. 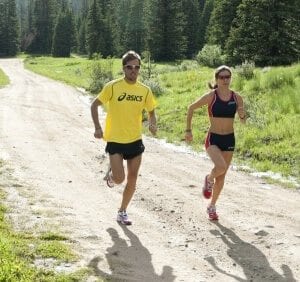 Jeremy Nelson and his elite marathoner wife, Adriana Nelson, enjoying a mountain run in the Boulder area just to give themselves a reason to use the R8.

Where can you buy the Roll Recovery tool? Online at Roll Recovery, in any speciality running store in CO, and many other running stores across the nation. This “untraditional” business has made bounds in their sales in the last two years, and hopes to provide high quality recovery tools that will last you at least 30 years.