There’s a saying about the cruel effect that money has on the quality of a product: “It eats quality and poops quantity”, William Burroughs. (Ok fine, he uses a different word for poop).

For so many expanding businesses, this insight seems to be true. Quality of product is surrendered to the quantity produced, as companies’ main goals are to become as large as possible, while trading in the integrity of their original products. Newton Running Shoes and ROLL Recovery (in my last two posts) have proved to evade this sentence, succeeding based on their commitment to quality, rather than quantity, while still expanding far past their original means. 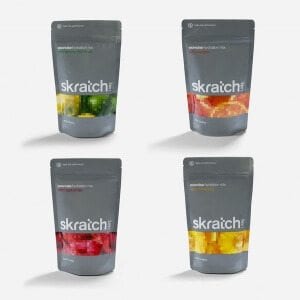 Skratch Labs, another Boulder-born company focused on improving performance for endurance athletes, provides scientifically proven sports-nutrition that, most simply put, “goes back to the basics”—Jason Donald, former athlete of Allen Lim’s and current Computer Operator of Skratch Labs. Lim, sports scientist, coach, and founder of Skratch Labs, stumbled on the psychological and physical benefits of feeding his pro cyclists “real food” during competition years ago, and decided to take his ideas to the next level. 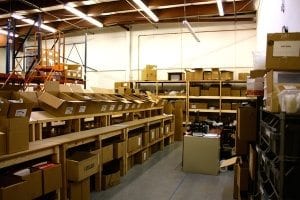 Every order, even international, comes through this warehouse on site of their worldwide headquarters. It was much more empty just a few months ago!

“Allen was at the 2006 Tour of Ireland when the nutrition sponsor for the athletes shipped fuel products that didn’t make it. The team had nothing. Allen, being the genius he is, bought 30lbs of potatoes. He cooked them, wrapped them in foil, and had the cyclists eat them on their bikes. Basically the complaining about feeling bad after eating their normal bars and drinks stopped.” –Jason Donald.

This experience led Lim to start “messing around” more with creating fuel for cyclists that was simplified. After being secretly swapped out for sponsor-provided drinks under the name “Secret Drink Mix” for a number of years, the drink was officially named “Skratch” in 2012, rightfully describing their mission to start from “scratch” in the world of artificial and mass-produced sports-nutrition products. Now, Skratch Labs produces their electrolyte drink mix made with real fruit, Skratch drops (gummies), and a dry cookie mix— all scientifically engineered to be as minimally scientifically engineered as possible.

How are the products different than say, Gatorade? Well, the ingredients in many of the leading brands of sports nutrition (Gatorade, powerbar, etc.) are densely concentrated into a bar or drink with maximum calories, and minimum resemblance to the experience of real food. Skratch aims to eliminate the artificial smells, tastes, after-tastes and weird effects on the body that come with these products, re-introducing the joy that eating a cookie or drinking a real fruit drink provides.

The Skratch team works in close-quarters, sharing ideas and jokes in between open doors.

As a business, Skratch aims to keep it small. The worldwide headquarters is no more than a few small offices, all doors open, with an office dog and white boards scribbled on with the team’s ideas. Jason Donald shares that he, at one point, has worked every single job in the small company, proving that it’s really a family-like business. “We play knock-out at lunch, and every Wednesday morning we come in early and take turns making breakfast for each other.” There are currently 16 employees, and they carefully consider before bringing on anyone new. 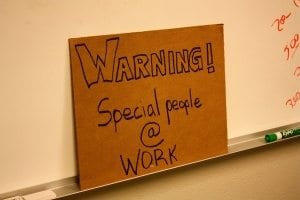 Sixteen special people, to be exact.

Skratch has never used traditional marketing, and hopes to never start. Word of mouth and the sponsorships with elite athletes (triathletes, motocross athletes, skiers, fencers, ultra-runners, cyclists, and more) provide them with as much publicity as they need. For more information, Allen Lim’s blog is available on the Skratch Lab website, where he makes his genius ideas accessible for everyone that doesn’t have a PhD (like he does)!