What to do When Boulder’s Sirens Call

Following World War II most cities and towns in the United States incorporated siren alarm systems for civil defense. These were originally intended to warn civilians of impending air raids, hence the colloquial term “air raid sirens”. These systems remained in place while the threat shifted from air raids to nuclear attacks. Nowadays the civil defense sirens in most towns are reserved for natural disaster warnings. You may hear them called “tornado sirens” for that reason. In Boulder County we mostly use them to warn of flash floods. 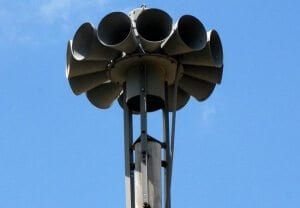 The next tests of the warning systems will occur at 10am and 7pm on the first Monday of the month throughout the flood season.

Refrain from calling 9-1-1 unless you are experiencing an emergency.

It pays to have a plan when things go wrong. Boulder County has its sirens and emergency personnel, and your family ought to have an emergency plan as well. Visit www.boulderoem.com for more information on how to prepare for the unexpected. Be safe Boulder.

Joe Inclan
Originally from Lone Tree, CO, Joseph Inclan graduated from Regis Jesuit High School in 2010. He applied to just two universities, DU and CU Boulder, and was accepted by both. Joe chose CU for its beauty, and the appeal of the open-minded and quirky city ensured him how right he was to choose Boulder. With a Bachelor’s degree in both English Creative Writing and Philosophy from CU, he has dabbled in everything from poetry to basic technical articles for 3DPrintingIndustry.com. His hobbies have a range too, from fountain pens and handwriting, to yoyos and skill toys. The most important thing for Joe is to understand things complexly. Boulder and its residents live in an evolving miasma of ideologies and cultures which demand more than a 2-Dimensional perspective. Joe’s fascination with Boulder stems from the fact that it is far more than the sum of its parts, and that is a unique quality. He is glad to be a writer with AboutBoulder.com and looks forward to spreading his knowledge of Boulder with the community.
See More Articles From Joe Inclan
Tagged: About BoulderaboutboulderABOUTBoulder.comboulderboulder coloradoBoulder Countyboulder eventsBoulderoemCallColoradoEmergencyfloodhistorylocaloutdoorsPreparePreparednesssafetySirensstudentstornadowarning
Boulder Colorado Air Quality