This week I went to Brian Saeger’s FREE class in the attic of Wesley Chappel. The class was packed with college  students, and is designed for students.

The workshop feel was very different than a typical yoga class, where students rarely speak. In this class, Brian would teach a section of the flow, and then totally stop the class for questions.

Before there was any yoga, Brian asked everyone in the class to introduce themselves. I’ve never been to a class where a teacher did this before. When I asked him why he did it, Brian said that “I really want everyone in my presence to feel valid, just the fact that they exist is enough for me. Cause you could come into a class and kinda sneak into the back and leave and never have any connection. I want people to know that warts and all, their excepted here in this space, cause that’s really what it’s for. It’s about healing.”

Brian teaches like he means it to. During a Q and A style break from the flow, a student stopped the class and asked if people could rearrange their mats around them so he had enough space to do the flow. “Did you see that,” Brian said. “A human being just asked for a need. I love you for that man. How many of you don’t do that?” A lot of people raised their hands. “I almost didn’t do it,” the student said.

I don’t think I would have felt comfortable doing that in most classes- but I probably would have at that class. That’s the kind of atmosphere Brian’s creates. 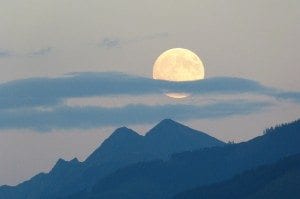 I have heard teachers talk about Pranayama in many classes, but it was always hard for me to find a way to ground it in my day to life. But what is it really? Is it an experience? Brian told me in the interview that it was both a practice and an experience and that people are doing all the time:

“Everyone does it. A lot of people wake up and start drinking coffee or eating sugar to get stimulated. They’re literally practicing Pranayama. They’re literally doing something to their body: taking certain foods, which messes with a chemical which increases energy, and all of a sudden they feel different and they’re vibrating on a different level…

It’s the same thing in the opposite, when someone is getting ultra-angry and they just need to take ten breaths, that’s Pranayama… All of a sudden you’re running late to class cause you chose to play a video game for five more minutes and knowing the whole time ‘I’m gonna be late.’ You’re practicing Pranayama… You’re choosing intentionally to set yourself up for feeling anxiety in your body right? So then you turn the game off, look at the clock, and think ‘Fuck I was right.’ Now you feel anxious. Now you gotta go. The endorphins are running. The stress is happening, and then you’re off.”

Brian said this is still practicing Pranayama, but it’s a dumb way of practicing it. For Brian, “The Pranayama is about getting as clean and as clear energy as I can. If I’m eating good, my energy is clean. I’m not bogged down. If I’m doing a physical movement practice, whether I’m hiking, stretching, you name it. It’s the same, it disperses that bound up energy in the body.

I make conscious choices all the time to practice Pranayama. I don’t run late to things, if I’m not 15 minutes early I’m late. But for me, I don’t wanna have that anxiety running through my body- for me my life is my Pranayama practice… I wanna have everything caught up all day, cause that feels really good to me and my body and my energetics. I’m not spun out, I’m not freakin out, I know where everything is at…

It’s very basic and based in reality. It’s not this kind of woo-woo thing… Those states that people write about and talk about- there’s only a handful of people in history that have really experienced those. As an America who was raised Christian, turned my back on that, and found this new path. I’m not going to say that I’m 100% head over heels about everything everybody has written about yoga, but for me it’s more about the applicable science of nervous system work and physical work and diet…

I read these books and I don’t really understand what they’re saying when their talking different dimensions. One book says to slowly cut the bottom of your tongue away so you can take your tongue and touch it to your third eye. Are you fucking kidding me? It’s just not gonna happen…”

Brian doesn’t make a living as a yoga instructor, but his work is part of his practice too. He runs his own business called Be Free Organizing, where he helps people organize their lives.

“I’m watching these people, and they don’t know what yoga is, they don’t know anything about this lingo. But I’m watching these people setting themselves up for unintentional suffering… But when there at a place when their calling me to come help them, I know their connecting to unnecessary anxiety in the body. And that’s what I really want to work with. I mean I love cleaning their spaces up too, but I’m literally teaching people pranayama when I’m doing that.”

Brian used to teach this class the way many teachers do; based on an experience that happened to him that week. The flow and poses would change each week. Now, he’s basing the whole semester of classes (the class runs based on CU’s schedule) on where his life is at-trying to move on after the end of a five year relationship. He said he struggled with his practice after the breakup, and needed to give it a consistent structure to move forward internally.

“It’s just about me getting into a calm place and getting out of the fear. For me, going through this breakup, there’s a lot of fear… You know- five years with one person, there’s a fear of change. My insecurities are coming up. Am I gonna find someone again? Am I going to have sex again? You know all these things are coming up. So I’m using a consistent practice, in my physical body, just to get me to drop in, and that’s where I can use my logic. ‘Oh ok I’m here, I’m in my body. Yes, I am going to find love again.  Yes I feel this fear.’ So it’s just kind of like a home coming.”

Brian’s use of yoga to work through fear and tie a physical practice to internal work isn’t limited to his recent breakup. One of the things that initially hooked him on yoga was its ability to help him work through fear, and to learn self-nurturing after a difficult childhood with an alcoholic parent. He uses it to leave behind the negative energy of others.

“I’m ACOA (adult child of an alcoholic). I had a really fucking hard childhood. I’m wired and programmed in a very specific way in the world. The first 16 years of my life was a lot of fear, and a lot of survival mode. So I learned how to survive in childhood, and I’m still playing out those roles as an adult, and it gets in the way of my relationships… It’s hard when before you know it you’re spun out and you’re on tip toes and egg shells, and you’re watching each other vigilantly like you did your parents to make sure your safe. So it’s really important for me to use my practice to drop out of that place of fear and reaction mode and know I’m safe. I’m an adult, I can take care of each moment as it comes. Cause as a kid you don’t really know that, you’re so involved in surviving that is all there is. It’s hard to create a life when you’re so wired for just surviving… My practice right now is to let go of that, cause I don’t wanna be triggered into my scared little child all the time.”

Brian has studied yoga with many different teachers, in ashrams and studios in many places outside of Boulder. But he doesn’t like to practice out much anymore. “I’m not inspired when I do. I’m like, ok I just did an exercise routine. There’s no depth. There’s no connection-for me at least.”

If you like to leave your yoga class drenched in sweat with exhausted muscles, Brian’s class might not be for you. If you’ve been turned off of yoga by other classes, or are looking for a practice that is more mental, you might your go-to class here.

“I started back in the 90s, back before it became an exercise thing, a fad. It was actually a beautiful practice of self-discovery. The communities then were so non-egoic. It wasn’t about Lulu-lemon, it wasn’t about how flexible you were, it was about these little pods of people who wanted to connect with each other and really be nurturing in our bodies… Everything became powery, and sweaty- I mean all that stuff was good. We did all that, but it wasn’t an exercise. It was just, it was different, I can’t even describe it. Early to mid-2000’s was when the shift started to really go off.”

The mental focus doesn’t mean the class doesn’t include challenging poses. Brian has included the shoulder stand sequence as part of the flow and is trying to get the class to eventually “relax” in Matsyasana shoulder stand variation, which is shoulder stand with legs in full lotus. 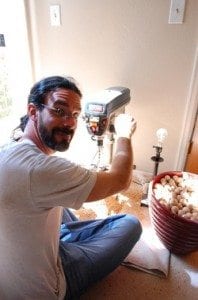 Brian working on the Yoga Matt Ties he sells

At the end of the class Brian gave some homework- spend a day, or at least part of the day with your phone turned off. This too is part of a pranayama practice.  Brian told the class after shivasana that, “it’s ok to not be connected all the time, everywhere, to nothing. And instead, see if you can actually connect to another human being.”

At the end of our interview, Brian said “This is one of my favorite classes I’ve ever taught. I’ve never had someone who is just down to earth and suffered and seen dark night of the soul and was willing to share space with me. Through my healing process, that’s what I wanna give back to the world, and this is one of the ways I can do that… That is exactly what a yoga practice is for. To keep us awake and aware and on the cutting edge of our lives. That’s definitely what yoga is about. That’s where the work is. Realizing we’re not so separate from everybody else, not separate from everything else.”

Until next week, Namaste Boulder. 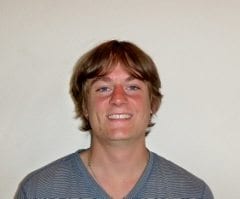