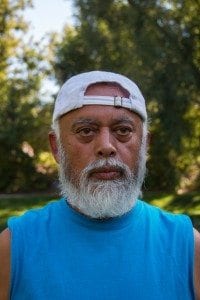 Since the beginning of The Faces of Boulder Project the AboutBoulder photography team has primarily focused our attention on multiple people for every online post, but this edition of the Faces of Boulder will be different because it’s all about one very special person who lives here in Boulder, Shankar Moghe.

Travis Bildahl and I ran into Shankar at the Eben G. Fine Park on a nice afternoon and realized right away that we had encountered a very unique individual that was self-actualized. 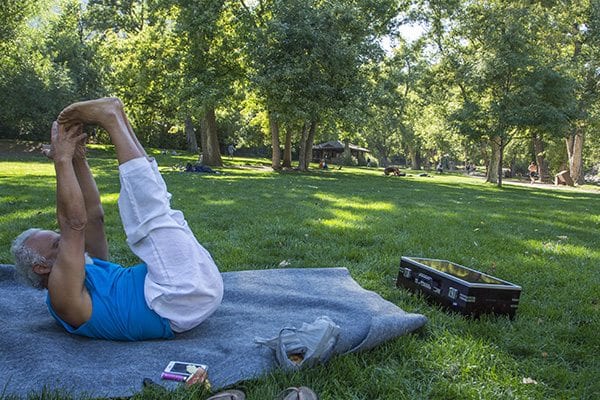 Shankar Moghe stretches out his legs on his mat in Eben G. Fine Park to cool down after doing yoga. Photo: Joseph WirthShankar was born in Nagpur, India and grew up meditating and doing yoga every morning before he was served breakfast as a young man. Although he wanted to become an artist when he was growing up his parents wouldn’t allow it, and he instead was very fortunate to be accepted to the Indian Institute of Technology in New Delhi where he received a degree in chemical engineering being taught by professors from all around the world.

He then moved to the United States and received two Master’s Degrees in Computer Science and Business Administration from Syracuse University. While he was living in Syracuse he fell in love with his wife Sophia, and they eventually had two children that grew up here in Boulder. 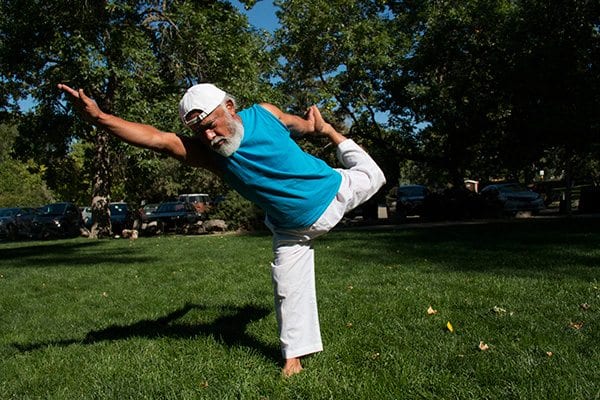 At age 62, Shankar began a revitalizing life journey in which he embarked on an adventure to find out who he exactly is. He told us that he is still continuing that journey today in Boulder and considers this time period to be the ‘foothills of his life’. Shankar explained that one of his favorite aspects of living in Boulder is that he meets new people every single day learning from everybody he encounters.

It was just a normal day for Shankar when Travis and I ran into him at the park, and we soon realized that there was a lot for us to learn from him. He spoke on subjects like the human self and what it actually means to be alive within the confines of body. Almost immediately he introduced us to yoga techniques that loosen out all of the tightness in the body and mind. Being experienced in yoga and meditation helped as Shankar guided us through several intricate poses, but he is such a good instructor and teaches yoga much differently than what you would get from a class at a studio. 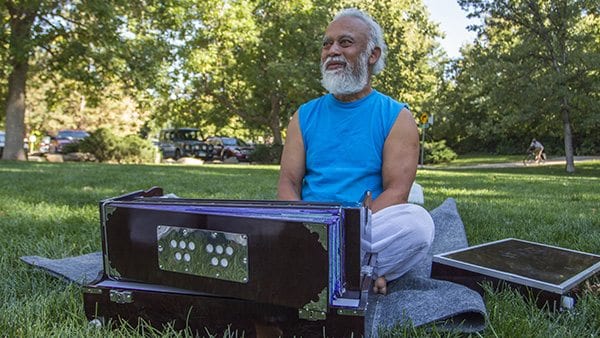 Shankar is also a very talented harmonium musician. A harmonium is a type of pump organ originated in India. Photo: Joseph Wirth 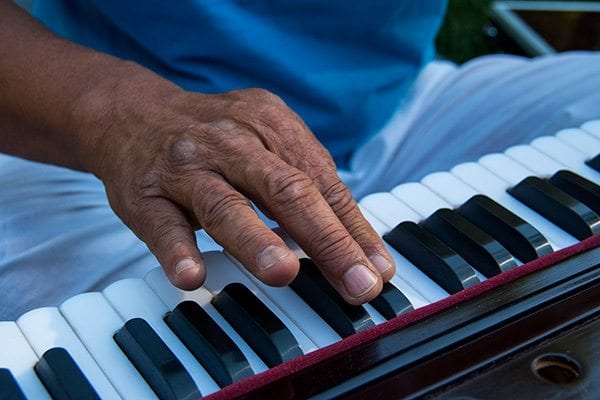 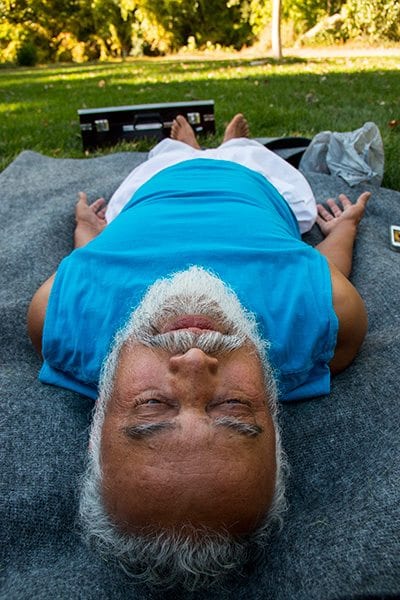 Meditation is a big part of Shankar’s life, and he says that it revitalizes the soul. Photo: Travis Bildahl 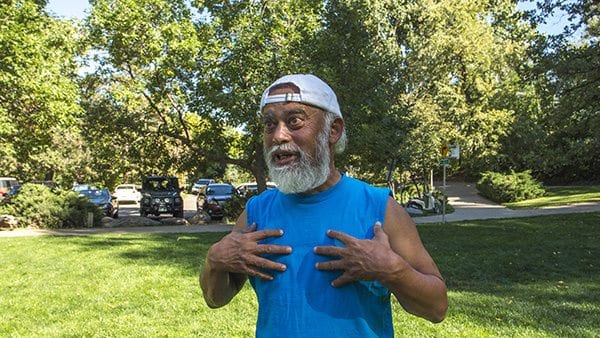 Shankar is a very passionate speaker, and right here he is describing how we’re all actually bodiless and infinite in our true selves. Photo: Joseph Wirth 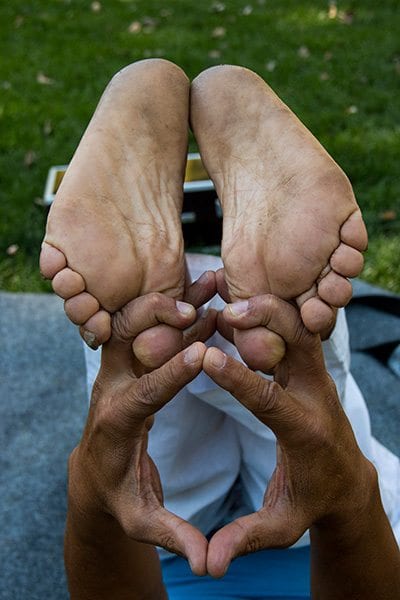 After we met and did yoga with Shankar he became a close friend right away, and that in itself speaks volumes to the type of man he is. We decided that we had to do more yoga and learn more from Shankar so we met up with him the very next morning at Chautauqua Park and started the morning with a balanced breakfast. 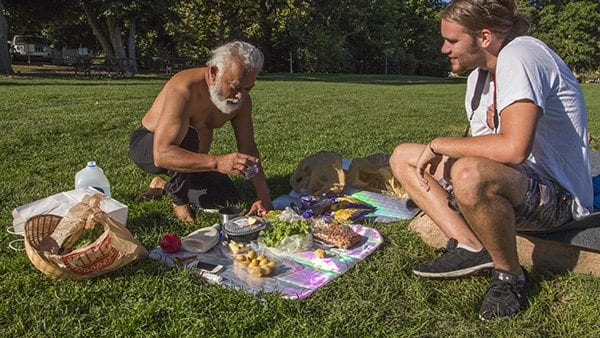 Shankar gave us another yoga lesson that loosened out every vertebrae in the back and created a sense of euphoria mentally. It’s Shankar’s ability to slowly guide his students to push the limits of each pose and then to equally push the limits of total relaxation through meditation that makes his style of teaching very effective and worthwhile. 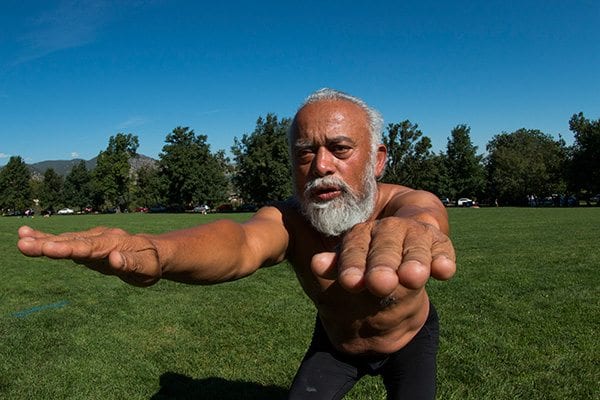 This is Shankar in chair pose. Photo: Travis Bildahl 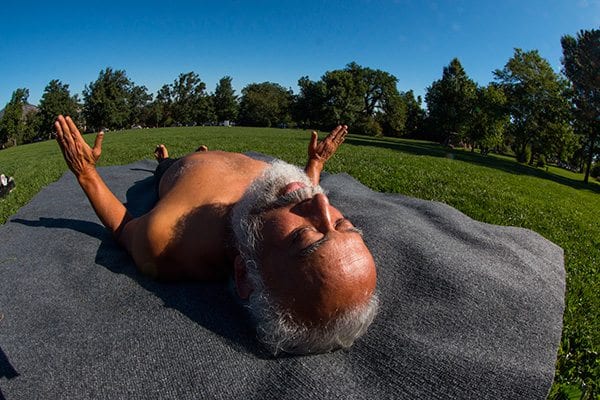 Almost every day you can find Shankar teaching yoga, playing music, meditating or having a picnic at Eben G. Fine Park, Chautauqua Park or other places around Boulder. All you have to do is approach him and tell him you’d like to learn and you definitely won’t regret it. 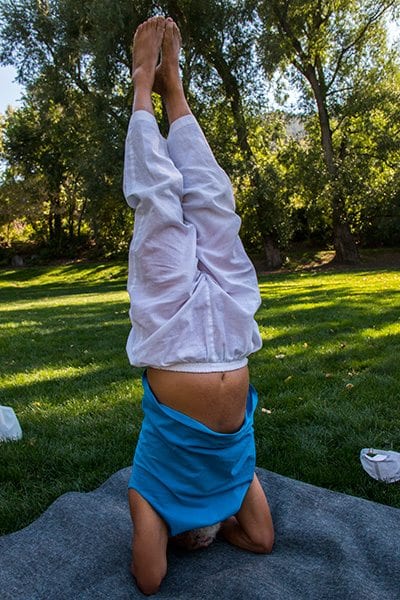 Shankar performs a headstand which he says isn’t as hard to do as most people think. Photo: Travis Bildahl

Thanks again for being a part of another edition of The Faces of Boulder and remember that when you improve your focus everything in your life improves; and if you want to practice some yoga at home here’s a link to one of Shankar’s videos that will help you improve your generalized focus.