Coffee Matters: Agriculture of the Bean

Last week, I offered an introduction to the geography of coffee farming. This week, we’ll focus on the coffee cultivation and processing.

As I’ve previously mentioned, coffee “beans” (seeds or pits) grow in moderate climates across the world on what’s referred to as the coffee belt. Coffee trees, which are actually more like tall bushes, are pruned short though they can grow to be over 25 feet tall. They are covered with waxy dark green leaves and blossoming fruit—of green, red, and yellow color—known as cherries, which grow along its branches. The beans or seeds are picked from inside the fruit once it’s ripened. While there are many different species of coffee plants, the two species that are commercially cultivated are Coffea arabica and Coffea canephora. The arabica plant yields numerous bean varieties but the canephora plant only yields the robusta variety, which is why the species is commonly called robusta. 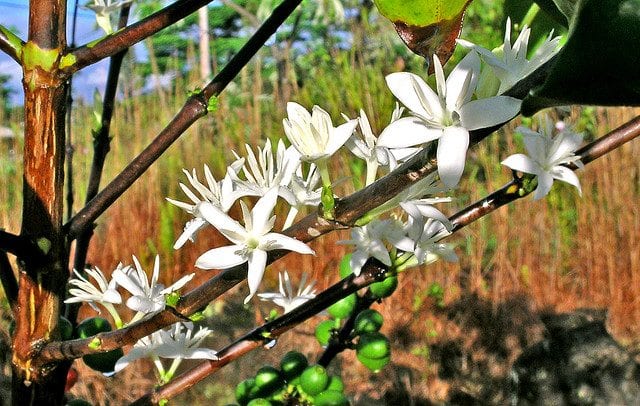 Just like wine grapes, certain coffee bean varieties and cultivars (varieties produced by selective breeding) have traveled from country to country. For instance, the bourbon variety—pronounced like the French last name and not like the Kentucky whiskey—is grown in parts of both Africa and Latin America. Still, bourbon from Rwanda will taste different than its Guatemalan sibling. Taste variations are not only caused by environment but also by differences in farming traditions and techniques. Each region, and sometimes even each farm, has their own way of processing the coffee they grow. 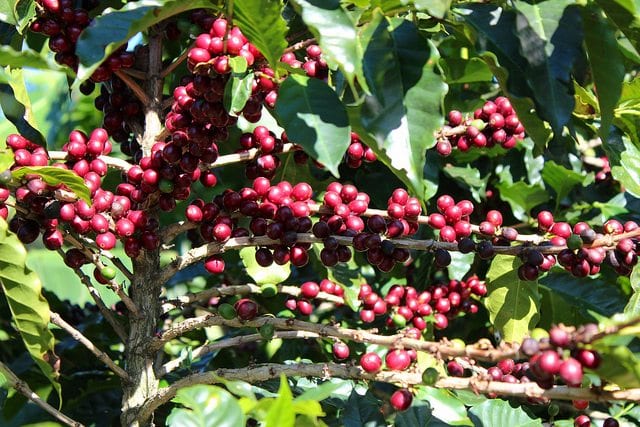 Processing refers to the time and energy spent on getting beans from the tree to ready to being shipped. From picking to washing to drying, each farm has its own processing method that affects the taste of brewed coffee. In order for coffee beans to be removed from the fruit, farmers use a washed, semi-washed/pulp natural, or natural/sun-dried technique. The washed process involves removing newly picked beans completely from the fruit by washing the beans first, slicing them out of the fruit, and then drying them bare in the sun or on driers. This method usually involves machines that use water and friction to clean the beans thoroughly before drying, leaving them free of any fruit glop. The washed process gives the coffee a crisp and mild flavor. Similar to the washed process, the semi-washed or pulp natural process removes beans with water but keeps remnants of the fruit on the bean during the sun-drying process. Because of the fruit remnants, semi-washed beans must be monitored carefully while drying so that they are dried evenly without molding or rotting. The semi-washed process gives the coffee a sweet and creamy taste. Unlike the washed or semi-washed process, the natural or sun-dried process doesn’t include a washing process. After being picked, the fruit is left to dry with the bean intact. Once they’re evenly and carefully dried, the beans are hulled out of the fruit. The natural process makes for an intense, distinct, and fruity flavor.

Getting to know the origins and cultivations of your coffee before it even reaches the roaster—where it’s grown, what kind of bean variety, and how it’s processed—is definitely a nerdy foodie activity. But even if you’re not a coffee geek, contextualizing coffee can strengthen your palette i.q., increase your general knowledge, and make you a more conscious consumer. The more you know about where your coffee comes from, the more likely you are to invest in better tasting and more ethically-sourced beans. For those looking to expand their coffee expertise in a more casual way, I still recommend buying/drinking coffee from third wave roasters who openly share their coffee sources and who try to do direct trade with quality farmers. A fun activity for even the casual coffee drinker is doing a tasting of different single-origin coffees. Many local, independent coffee shops do occasional or routine tasting where you can compare beans from different regions or of a different variety. You can also do tastings at home, although I recommend pour-over brewing methods rather than using an automatic drip coffeemaker.