The grand red sign and huge white marquee of Boulder‘s Fox Theatre give the building a sense of purpose and permanence. This strong identity boldly contrasts the complex and confusing history of the building itself. This nearly 90 year old space has housed vaudeville acts, a cafe, and a other interesting things in between. 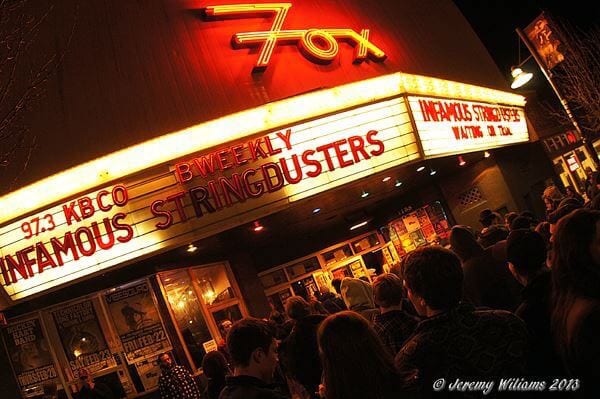 The building sitting at 1135 13th Street on The Hill was constructed in 1926 by Adrian G. Diez, but was first owned a Mr. William Beach. Beach sold the building to Diez in 1926, and the building changed hands no less than 8 times to become what it is today. Its first name was the Rialto Theatre, a place whose purpose was to remain vacant.

There is some confusion in the records as to what the Rialto Theatre featured as its primary entertainment. Some articles point to a vaudeville theater, others to a movie theater. I believe the vaudeville theater hypothesis has more merit. Diez sold the Rialto to the Curran-Isis Theatres Company in 1927 and it was closed down due to “lack of business” several months later. The company also owned the Isis Theater in Aspen, CO. They likely shut down the Rialto to ensure that the Isis had less competition as vaudeville theaters were losing popularity. By 1932 the theater had changed hands two more times, but remained “vacant” according to city records.

From 1938-1940 the building was occupied by the Buffalo Dancing Club. However, by 1943 it was vacant again. April 9th of that same year, John Hart filled the space with the Anchorage. Manager Hart set out to make the theater into a dance hall and eatery, claiming a lack of good recreational spots for students and Boulder folk. Friday and Saturday nights the jukeboxes sang and the patrons cut loose after a few sodas. Later that year, the Anchorage was closed for a week by City Manager H.C. McClintock for hosting a “liquor party”. But what became known as the Anchorage Bar & Grill managed to hold the space through 1949.

At this point, the theater had been renovated to fit a food-service business. Fox Intermountain Theaters acquired the building deed in 1946 and rumors of converting the space back to a theater had gone unfulfilled. However in 1951, Fox Intermountain obtained a permit to convert the space into a cafeteria, and they did. In 1953, Ted’s Buff Cafe was officially listed in local directories and was advertised as “Boulder‘s most modern eating house.” Just as its predecessors, the operation would not last.

At 2022 14th Street, in downtown Boulder, there was a Fox Theater (note the spelling). On April 18, 1960 the Fox Theater was ruined by fire. Fox Intermountain owned the space at 1135 13th Street and so they applied for a permit to finally convert it back into a movie theater. Their plans included the iconic sign and giant marquee still featured on the building today. The new Fox Theatre opened in 1961 and could seat 500 movie-goers.

The movie theater format stuck until 1991 when the Pyramid Group Inc. acquired a liquor license while leasing the space from Mann Theatres. The space was gutted and turned into the intimate concert hall we know today, and could fit 625 patrons at a time. In 1994, Celtic Properties bought the Fox, and still own it as of this article’s publishing.

If the history of the Fox Theatre seems confusing, I can assure you it truly is. The main entrance to the building had at times been bookended by small shops. Over the years these little business sold shoe shines, flowers, electronics and even life insurance! It seems the various building owners have always tried to feel the pulse of Boulder and adapt accordingly.

The Fox Theatre space has been many things to Boulder over the decades, which makes its national acclaim as a concert hall all the more impressive. In 2013, the Fox Theatre was named #4 on Rolling Stone’s list of the Best Clubs in America. It has continually lent itself to cozy entertainment for locals and travelers alike. And the convoluted, piecemeal history of the building adds to its eclectic character. Whatever becomes of the Fox Theatre in the future, I hope the businesses within will continue to serve the community and its thirst for creative entertainment.