The Colorado Workers for Innovative and New Solutions union stated that about 100 CU Boulder employees will be staging a protest and march on the Boulder campus this Thursday, November 5th. Their goal is to reach the office of CFO for the Boulder campus, Kelly Fox, to deliver a petition demanding higher wages.

This protest was sparked by Fox’s rejection of a wage increase proposal from the Housing and Dining Services officials. The officials proposed $15 hourly wages. Fox postponed a decision on the wage increase for Housing and Dining, and asked her team to evaluate the possibility of wage adjustments for custodial staff of all CU’s departments. The Athletics department and Facilities management custodians were not mentioned in the original proposal. On October 20th, she issued a letter to the custodial staff stating that she had received the request and was working on assessing the viability of wage increases. An action plan was to be devised within 60 days of the letter’s issue. The Housing and Dining Services saw this as a rejection of their proposal.

A petition was created by the Colorado Workers union and CU custodians which demanded that all CU employee wages be raised to a minimum of $15 an hour, including contract hires and student employees. This online petition already has over 250 signatures, and the union hopes that there will be over 900 by the time the march on campus begins. Olga Robak, representative of the union claims that the workers are disgruntled due to evidence of increased spending at CU, without increase in the wages of employees. 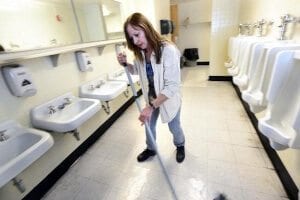 The union claims that the administrative staff is “disproportionately” overpaid compared to the operations staff. Renovations to Folsom Field, tuition hikes, and fee increases point to CU’s significant income and spending, but the wages of service staff are unchanged. Laurel Loesser, CU custodian told the Daily Camera that she is “living in poverty working for CU”. Loesser recently moved into subsidized housing in Denver, and commutes to Boulder to avoid its high rent costs. She struggles to make ends meet at an $11.35 hourly wage and claims a jump to $15 would improve her life “dramatically” as she helps her 21 year old daughter through school. Loesser also admits to sometimes visiting the food banks in Denver to put meals on the table.

CU’s Kelly Fox is working to evaluate the wages, and it is only 14 days since her letter to the custodial staff was issued. Campus spokesperson Bronson Hilliard spoke in defense of CU, stating that administration and service staff are part of “different labor markets” and that “different forces are brought to bear on their salary levels.” Hilliard also pointed out that compared with their peers from other schools of the Association of American Universities, CU Boulder administration salaries are at, or below, average.

Both halves of this argument are acting quickly to defend their own sides, but the union workers appear to moving faster by way of the upcoming protest. The issue is important to consider from both sides. If the workers of CU are in fact impoverished, and CU could reasonably help them live better, they probably should adjust wages. But, the workers must realize that the administration has an astronomical amount of responsibility placed on them in their work, which is part of the reason the administrative salaries trump service wages. Plus, if the university does not make improvements and spend money on marketing, then CU brings in less tuition money and student traffic, and then the whole city is affected.  Hopefully an understanding and fair course of action will be reached soon.

Do you have an opinion on this issue? Let us know in the comments below!

Joe Inclan
Originally from Lone Tree, CO, Joseph Inclan graduated from Regis Jesuit High School in 2010. He applied to just two universities, DU and CU Boulder, and was accepted by both. Joe chose CU for its beauty, and the appeal of the open-minded and quirky city ensured him how right he was to choose Boulder. With a Bachelor’s degree in both English Creative Writing and Philosophy from CU, he has dabbled in everything from poetry to basic technical articles for 3DPrintingIndustry.com. His hobbies have a range too, from fountain pens and handwriting, to yoyos and skill toys. The most important thing for Joe is to understand things complexly. Boulder and its residents live in an evolving miasma of ideologies and cultures which demand more than a 2-Dimensional perspective. Joe’s fascination with Boulder stems from the fact that it is far more than the sum of its parts, and that is a unique quality. He is glad to be a writer with AboutBoulder.com and looks forward to spreading his knowledge of Boulder with the community.
Tagged: 2015About BoulderaboutboulderABOUTBoulder.comboulderboulder coloradoboulder eventsC4Ccampuscenter for connectionCollegeColoradocommunityCUcustodiansDenverInspirationKelly Foxlocalminimum wageMotivationprotestrallystate workersstudentsSuccesswage