Most of the West was divided up into straight-edged, boxy regions and subdivisions (take a look at poor Yuma County). Boulder County escapes the purely rectangular form of other counties in Colorado, and today we will tell you why. Plus, we will tell you why it’s named Boulder (but we bet you can guess).

The need for Colorado to become a territory coincided with the secession of several southern states from the Union in 1861. Colorado applied for statehood that year, and offered the Union secure access to precious mineral deposits. Boulder County was one of the original 17 counties of the Colorado Territory officially created November 1, 1861. Fun Fact: Just 6 days later the approval was given to Boulder County to establish the University of Colorado.

Since the University was a long way from breaking ground, perhaps we can excuse the name “Boulder” for the county seat. Boulder, CO was named for Boulder City and Boulder Creek. The city and creek were named for the huge granite Boulders in this mountainous region, especially those which had tumbled into Boulder Creek. We speculate it was something like “Throw this stick, and we name the city after whatever it hits!” Luckily this simply named city has grown into something complex and cherished. 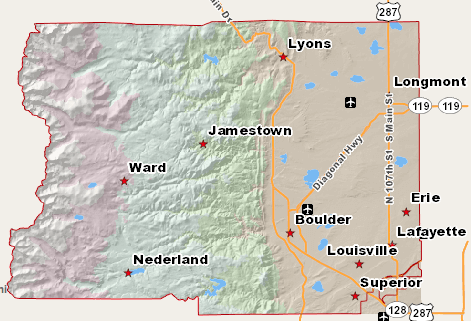 The shape of the county it very boxy. But the westernmost border, on the left side of the county map, is jagged. This line follows the contours of the continental divide. You could say that Boulder is the gateway to the West… Well, maybe more like the bouncer at the door, deciding who’s “western” enough to pass through.

One last tidbit about Boulder County’s borders is that a small piece of the Southeast corner of our lovely county was taken by Broomfield in 2001. Broomfield was a city unfortunate enough to spring up on the borders of 4 counties: Adams, Weld, Jefferson, and Boulder. They finally got tired of dealing with 4 different tax rates, municipal court systems, etc. and became their own county/city. The city of Broomfield never saw eye-to-eye with the municipality of Boulder, so it was probably land area well spent.

Don’t forget to give us a like on Facebook if you learned something today! We really appreciate it.