As a former barista and current coffee enthusiast, I regularly find myself talking to others about coffee. In the coffee discourse, my aim is to promote the ideals of third wave coffee without sounding grandiose. A label that is often met with eye-rolls and associated with shallow trendiness, “third wave coffee” is actually an extensive umbrella term and one that I like to use when describing my favorite aspects of America’s current coffee culture. On this new weekly column, I’ll be expounding on contemporary coffee themes and exploring Boulder’s very own coffee scene. 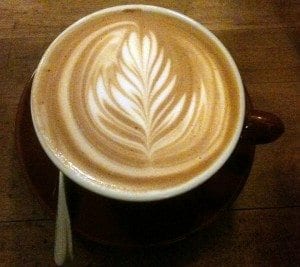 latte art by me, during my barista glory days

I like to compare coffee to beer. I think the cultures are similar and I’m sure Coloradans will appreciate the comparison. Both coffee and beer are easily accessible and embedded in our culinary culture and, for most of us, our personal routines and social lives—with coffee even more so than beer. Some Americans drink coffee just for the caffeine, the way they drink beer just for the buzz. They care less about taste and more about the mood altering or physical effects. But many drinkers do care about quality and like the craft/microbrewery beer culture, the coffee world too has its passionate employees and aficionados who are invested in artisanal cafés and roasteries. For coffee novices, I think contextualizing coffee historically is a good place to start your coffee education. Coffee is at once a popular drink that’s seemingly simple and also a big global industry with a fascinating history and important role in our environment and economy.

In the U.S., the evolution of coffee is referenced by “waves” (like feminism)! The first wave of coffee (the suffragists, if you will) was instant coffee. It was a quick and easy way to make your own coffee at home. Second wave coffee (the Betty Friedan era of coffee) came out of the rise of coffee houses like Starbucks. It introduced espresso-based drinks and Italian café terminology to a predominantly middle class customer base. These traits eventually trickled down to more shops and became trendy with more consumers, making Starbucks an icon capable of standardizing coffee habits and influencing coffee-related diction. Years after this second wave went mainstream, many baristas and coffee drinkers across the country began wanting something more nuanced and less corporate. The third wave coffee revolution began growing in the late 1990s and was cultivated by independently minded coffee lovers wanting to make better tasting and more ethically produced coffee. Although the Northwest is highly recognized for leading the movement, roasters and shops across the country have been helping to foster this significant shift in coffee consumption. The third wave coffee movement (like its feminist counterpart) is diverse. Still, its general and common features are found within the three branches that every coffee business covers: coffee shop, roastery, and farm.

local based artisanal roasters that can easily distribute beans to nearby coffee shops, which helps maintain freshness and cuts down on carbon emissions.

exercising fair or direct trade with often sustainable or organic farmers in the main regions where coffee is grown—Latin America, Africa, and Indonesia.

Despite the recent swell and subtle corporatization of third wave coffee methods, many coffee drinkers are disinterested in embracing this wider wave. Progress is hard, especially when a movement asks you to get out of your comfort zone and change your habits. I mean, it’s just coffee! Right? Well, the coffee industry has always been about more than just your favorite cup of joe. And now that it has the potential to change for the better, on a grand scale, it’s a good time to learn more about the ways in which our coffee habits affect the globe. Expanding your coffee knowledge will help you to enjoy drinking coffee more and help you become a more conscious consumer. Boulder is both a progressive place and a foodie city so I’m excited to watch how the coffee scene expands here and I look forward to having informative and engaging discussions about it. Check back with me next week for more details on the third wave coffee movement and why it matters.