A Boulder resident in the 1940s remarked that Pearl street is “a good place to buy a pair of socks.” I think this adage holds true today, and that Pearl offers Boulder exponentially more to go along with those socks.

Pearl Street is supposedly named for one of the wives of the original 54 founders of Boulder. However, I have also heard whispers that “Pearl” was a madam of a brothel once located near what is now Pearl Street. The first explanation is more likely, though I find the second more provocative and appealing. 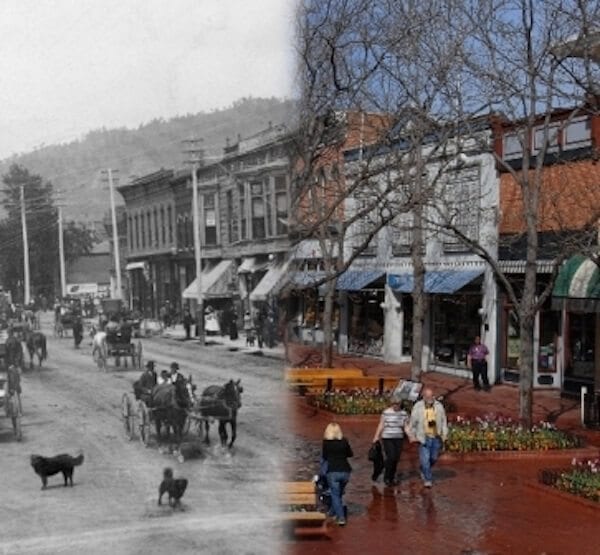 If I had to describe Pearl Street, I would say it’s an intermingling of students, year-round residents, activists, street performers, and food venders. Not to mention big name stores, pipe shops, Nepalese gift stores, hole-in-the-wall bars, and unique eateries. This list is not exhaustive, and I don’t think Boulder’s cultural heart could be condensed into a list like this anyway.

At the sight of the current Broadway and Pearl intersection, a stake was sunk into the earth. The people who drove the stake had come to Colorado for gold, and stayed for the scenery. From that stake’s location surveyors sighted a straight line to Valmont Butte. This line was made in order to create a straight geographical line on which to construct Pearl Street. Consequently, the whole of downtown followed this line. This is why on a map, downtown Boulder conspicuously runs Northeast/Southwest instead of East/West like more recently constructed roads in the city.

Though the strip is currently strewn with big name stores, it has many locally owned shops as well. This local ownership has always been in the spirit of Pearl Street. The shop owners who worked off the bare dirt of ye olde Pearl Street built wooden boardwalks in front of their stores. These walkways encouraged customers to come aboard and search the stores’ wares away from mud and dirt. However, there were no specific codes for these walkways and stores would butt theirs up to others of different heights and sizes. By the 1880s, townspeople grew tired of their impromptu step workouts and tore up the boards in favor of flagstone.

No road in Boulder advanced past the ingenuity of crushed rock until 1917. That year, Pearl was the first street in Boulder to be paved and accompanied by lovely, uniform, 15-foot wide sidewalks. Pearl and Broadway also featured the city’s first streetlight. Gradually the roads all got paved, the storefronts were lowered, and downtown took on a more modern aesthetic.

In the 1960s and 1970s Pearl and the rest of downtown suffered from massive population increase, and a related spike in crime. The small stores on Pearl and neighboring streets could not compete with suburban stores, which were more convenient for post-WWII suburban housewives. Things looked grim until governor John A. Love signed the “Public Mall Act” in 1970.

The Public Mall Act made it possible for cities to close down parts of streets for conversion into pedestrian malls. This act inspired the creation of 16th Street in Denver as well as our beloved Pearl Street Mall in June 1976. Traffic was halted from 11th to 15th street and the mall’s dynamic of park-then-walk was officially established. The parking improvements coinciding with the mall development saved the downtown area, which is why it remains in good health today.

Now, Pearl is more the cultural center of Boulder than its commercial lifeline. You are more likely to find some awesome bucket drummers than you are a pair of socks. I think Boulderites appreciate this kind of surprise when visiting Pearl. Over the decades, Pearl Street has gradually grown and changed with Boulder and I expect it to be one of many local focal points for decades to come.