After the flood that took place in the fall of 2013, most Boulder residents are sadly acquainted with the destructive power of rain and the Boulder Creek–normally a source of pleasure and entertainment. Many believe we had suffered from a 100 year flood when over nine inches of rain fell in the Boulder County area that September. Misleadingly, a “100 year flood” is not an event that takes place once every 100 years, but one that has only a 1% chance of occurring each year.

But this was not the first time Boulder had experienced a disaster of this scope. Between May 31st and June 2nd, 1894, Boulder had over 96 hours of warm spring rain. This combined with quickly melting snow caused the first recorded 100 year flood, one that decimated the better part of the downtown area. 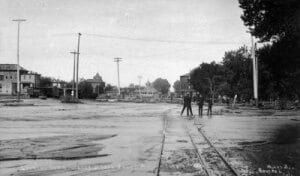 As in 2013, signs of the the 1894 flood first appeared in Boulder Canyon, which was severely rerouted by it. Many claimed that the Canyon was never the same after that, and that the flood had destroyed much of its natural beauty. In Boulder proper, bridges, railroad tracks, and even a few houses were swept away as almost nine inches of rain fell. 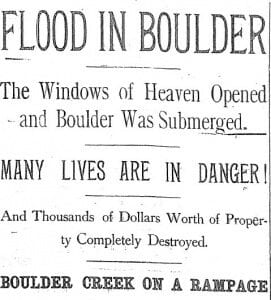 On May 31st, the Daily Camera went so far as to describe the area between University Hill and Bowen’s Hotel on 13th and Walnut as “one vast lake, with here and there a small path of island.” The extent of the flood damage meant that Boulder was cut off from the rest of Colorado for five full days!

When the rain finally stopped and repairs could begin, many able-bodied man in Boulder County helped to clear the debris from the roads. In exchange for their labor, they asked to be fed while they did their labor and paid whenever it was convenient for the city.

While it is unlikely that we will experience another flood of this magnitude in our lifetime, these events occur in Boulder with some regularly in the spring and summer. Major floods also took place in 1919, 1938, and 1969, though the extent of these was lesser than either 1894 nor the 2013 floods.