Home » Blog » CU Buff Stuff » Who Is Our President, Even? (The CU President That Is)

Who Is Our President, Even? (The CU President That Is)

It’s strange to realize that after three years at he University of Colorado Boulder, I have very little knowledge of who Cu’s President is. Up until last semester, I had absolutely no idea who, or what our president’s name even was – and on that note, the only reason I do now is because I worked as a suite attendant in the Presidents suite during football season.

CU’s president, a kind, warm, and intelligent man, became the head of the University in 2008. Being head of CU encompasses more than just Boulder, though. He is the president of all four campuses: Boulder, Denver, Colorado Springs and Anschutz. Since taking the reins of CU, Benson has succeeded in enhancing CU’s standing as one of the nation’s leading public universities, advancing the economy, health and culture of Colorado. Futhermore, during his time in office, CU’s research funding has soared to record levels, accumulating over 861 million from 2013-2014 alone. It’s safe to say that Benson has made a remarkable impact on CU as a whole.

Aside from being the head honcho at Boulder, Benson has much experience in a wide array of fields. In his part, Benson had left his mark in business, politics, philanthropy, education, and in various civil endeavors. – A man with many titles. We can only assume that he was also a cowboy, geologist and astronaut, too. Well, he may not have been a cowboy or an astronaut, but Benson was also geologist in his past time. In 1965 he founded the Benson Mineral Group shortly after graduating from CU with a bachelor’s degree in Geology. 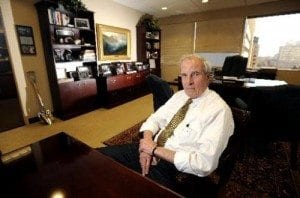