I often hear Boulder being hailed, and sometimes scorned, as a place of liberal thinking. But many fail to acknowledge the influence of Eastern ideology on the culture of Boulder. The Buddhist culture in Boulder is quiet, perhaps due to its dynamic history. It began with the exile of the Dalai Lama after the failed uprising of Tibet against the People’s Republic of China in 1950.

Following the failed revolt, China issued the 14th Dalai Lama, and therefore Tibet, an agreement called the Seventeen Point Agreement for the Peaceful Liberation of Tibet. This document cemented Tibet as a permanent fixture within China. Further revolts in Tibet, caused by the less-than-liberating pact, made the Dalai Lama fear retaliation from China and then flee to India in 1959. While exiled in India, he called upon Chogyam Trungpa Rinpoche, a Tibetan Buddhist monk, to help spread the Lama’s teachings.

While in India, Chogyam Trungpa studied English and eventually got a scholarship to study comparative religion at Oxford. To summarize about 10 years, Trungpa Rinpoche moved to Scotland, was in a car accident which partially paralyzed his left side, dissented from his monastic vows, and began teaching Buddhism as he saw fit. He had been trained in a Buddhist school which wanted to be non-sectarian, to eliminate the rivalries between Buddhist sects. Freed from his vows, Chogyam Trungpa Rinpoche took the practice even further, attempting to bring Buddhist practices to all people.

Chogyam Trungpa moved to the US in 1970 and founded what is now Shambhala International, an institution teaching the noblest principles of Buddhism to Westerners, in Boulder Colorado. He also taught at CU Boulder in 1971. By 1973 he founded what was called Karma Dzong, which is now the Shambhala Center just north of Pearl Street (shown below). 1974 then saw the founding of the Naropa Institute, the first accredited Buddhist institution in the US, now simply Naropa University. 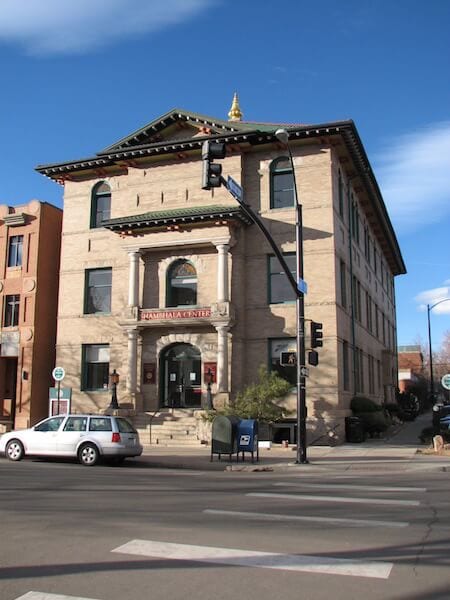 All these institutions and education centers are vitally important to the Shambhala training pioneered by Chogyam Trungpa Rinpoche. This type of spiritual practice deems unnecessary the distracting garments associated with traditional Tibetan Buddhism. Likewise, the ethnic ties and familial continuation are abandoned. Deities and firm doctrines do not exist. One enormously important thing about Shambhala is the acknowledgement that answers are elusive.

Chogyam Trungpa coined the term “crazy wisdom” to describe the knowledge one gains from finding no answers. When one continues questioning things like “Why practice spirituality?” or “Is there purpose to contemplation?” there is a salient realization that there are no complete answers to be found. The point then, is finding peace in pursuit. This promotion of “crazy knowledge” may have led to Trungpa Rinpoche’s decision to invite a Zen master from Japan to Boulder.

Operating alongside the Tibetan-descended Buddhists in Boulder are the Japanese Zen Buddhists. In Boulder there is the Zenko Iba, or Zen Archery Dojo. This establishment was founded by Kanjuro Shibata Sensei XX in 1980 after he received an invitation from Trungpa Rinpoche to teach kyudo here. Kyudo translates roughly as “way of the bow” (kyu = way/path, do = bow). Dissatisfied with the competitive and achievement-obsessed nature of kyudo practice in Japan, Shibata Sensei came to teach a more meditative archery in Boulder.

In Kanjuro Shibata Sensei’s practice, the goal is not to hit the target. In fact, aim is mostly irrelevant. The goal is to fully experience the movement of body and bow without concentrating on exactly where the arrow will go. The target then, becomes a reflection of the self. The point is not to hit the bullseye, but to wholly experience yourself and your surroundings without judgement or concentration. Just as with Trungpa Rinpoche, the pursuit is the perfection, and there is no so-called “point”. Sensei grants no merits, no belts, no achievements. This type of spiritual practice eliminates a false idea of human beings as reflections of their achievements. They have dignity in themselves.

Boulder‘s Buddhist history is a profound one, which can be traced all the way to the Dalai Lama himself with the selection of Chogyam Trungpa Rinpoche as a spiritual teacher while exiled in India. The varieties of Buddhism in Boulder are unique in that they are essentially atheistic. There are no socially recognized achievements for these spiritual practices. There are no sacraments or Gods. There are only people. People pursuing contemplation and archery, only to find them vacuous. But as an infamous philosopher once said “And if you gaze for long into an abyss, the abyss gazes also into you.” Buddhism in Boulder is an abyss we look into so that we may see ourselves in actuality, and without judgement. The Buddhism here is grounding, humbling, and enlightening. And if this is “liberal thinking” then I hope it projects as far into the future of Boulder as it has into its past.

Joe Inclan
Originally from Lone Tree, CO, Joseph Inclan graduated from Regis Jesuit High School in 2010. He applied to just two universities, DU and CU Boulder, and was accepted by both. Joe chose CU for its beauty, and the appeal of the open-minded and quirky city ensured him how right he was to choose Boulder. With a Bachelor’s degree in both English Creative Writing and Philosophy from CU, he has dabbled in everything from poetry to basic technical articles for 3DPrintingIndustry.com. His hobbies have a range too, from fountain pens and handwriting, to yoyos and skill toys. The most important thing for Joe is to understand things complexly. Boulder and its residents live in an evolving miasma of ideologies and cultures which demand more than a 2-Dimensional perspective. Joe’s fascination with Boulder stems from the fact that it is far more than the sum of its parts, and that is a unique quality. He is glad to be a writer with AboutBoulder.com and looks forward to spreading his knowledge of Boulder with the community.
See More Articles From Joe Inclan
Tagged: About Boulderboulderboulder coloradoboulder shambhala centerBuddhismChogyam Trungpa RinpochecommunityCUhistoryInspirationKanjuro Shibata Senseireligionshambhalaspirituality
Boulder Colorado Air Quality