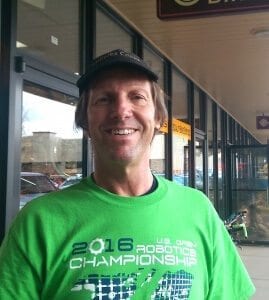 I met Mike outside Boulder Bikesmith as he was trying to fit his mountain bike into his SUV. A common site in Boulder!

Originally from New Mexico, Mike and his wife moved here from San Diego in 1997. “We came out for a job opportunity, went up Flagstaff, took a look over the the front range and that was all she wrote. We never went to the beach in San Diego, we were always more oriented towards the mountains, so this was a perfect fit.”  He was a runner, qualifying for the Boston Marathon. Mike didn’t run it because he got more interested in trail running. Another reason to love Colorado.

Along with running, Mike has been mountain biking for 30 years and the bike he’s riding now is from 1993. He was going to trade it in, but was convinced to fix it up and Mike’s thrilled with the way it rides. He likes the old school feeling and style.

Mikes favorite rides in Colorado are Walker Ranch and Boulder Open Space. He is looking forward to getting up in the mountains this Spring and Summer.

Mike described himself as being in semi retirement now. After working in biotech for the last 25 or 30 years,  he just finished a Chinooks cooks culinary arts course at Alpine Center and he’s working part time there. His dream is to have a food truck serving healthy, inexpensive appetizers. He wants to be able to serve many varieties of appetizers and small plates.  He thinks it would be great to have a set up at a trailhead or at a food truck court.

Mike, Thanks for sharing your story!