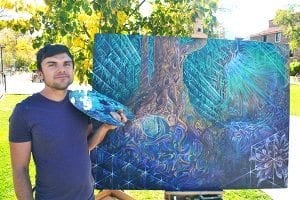 Originally from Colorado, Derek spends a lot of his precious time as a painter! His passion comes from many places, one is compassion, because he feels the need to respond to a lot of the people that he’s associated with at work because they need him in a lot of ways. Another is his love for arts and creative expression. It’s very motivating to explore consciousness in London. When he projects himself in the future, he would like to be a professional artist, and exclusively own an art community house, where everybody chips in. Enough individuals that rent is cheap and it makes it easier to survive as an artist and everybody that lives there has agreed to contribute a portion of their proceeds to the environment. From Derek’s experience, this helps a lot with success because a lot of people can relate to that. It touches everyone and it’s an ironic thing in which it is unsuccessful and successful at the same time.
He loves a lot of things about Boulder! One would be that we’re right next to the glorious mountains and there’s a lot of free, open beautiful space right next-door to explore! Another thing Derek loves about Boulder is he’s been all over America and the people here are generally more open-minded and explored, and have attitudes that help each other be more free about expression and he appreciates that the most.
Thank You Derek!
aboutboulderadmin
See More Articles From aboutboulderadmin
Tagged: aboutboulderartboulderfacesofboulderlifereal
Boulder Colorado Air Quality