Putting milk in your coffee or drinking a milk-based espresso drink is a great way to fight coffee’s natural acidity. Many coffee drinkers like cow’s milk in their drinks, while others enjoy dairy-less alternatives like soy or almond milk. Here in Colorado we’re fortunate to have access to local milk and non-dairy options to go with our coffee. But as a vegan who doesn’t like processed foods, I take my coffee black. Drinking black coffee and regular espresso definitely makes me feel cool but I recognize that it’s an acquired taste and sympathize with milk’s popularity. As a former barista, I’d like to share some of my more professional opinions along with my personal recommendations about your milk options. 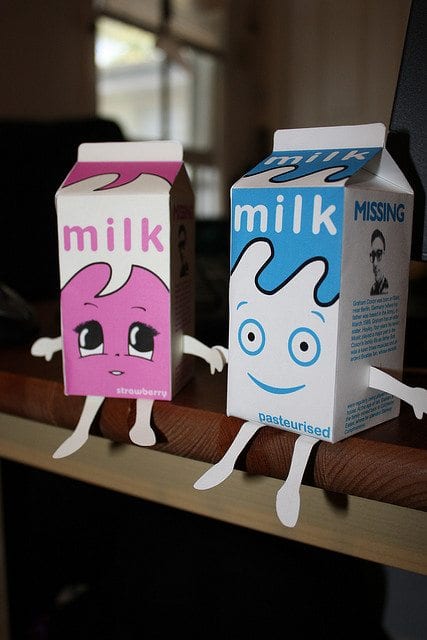 Obviously as a vegan who cares about animal rights I’m not crazy about people consuming dairy. But as a former dairy consumer and barista, I know how well cow’s milk couples with coffee. I also know how addictive the proteins in dairy are so I don’t harshly judge those who put milk in their coffee! Whether it was drip coffee or an espresso drink, I remember how nothing compared to the taste and texture of whole milk. The natural creaminess of it is especially good for steaming/foaming and creating optimal latte art. Low fat milk can be similar in taste and texture but non-fat milk is its own strange entity. I find it too watery and bland. If you’re looking for less fattening milk, try low fat milk by mixing a bit of non-fat with whole—many coffee shops aren’t supplied with low fat milk cartons anyway and instead make it by mixing whole and fat free. As far as lactose-free milk, I’ve never worked with it professionally so I can’t speak for its steaming texture.

If you avoid dairy for ethical or health reasons, there are alternatives for your coffee-drinking pleasure. Soy milk is the most popular option but it’s also the most processed (here in North America but not necessarily in Asia). Soy itself is an often genetically-modified crop in the U.S. and most American soy products contain chemicals. If you look at the back of a soy milk carton, you’re likely to see a list of chemicals and a lot of sugar. The chemicals are usually for adhesive purposes, which give the soy milk a creamy texture. The sugar is obviously for taste, not to mention it’s an addictive ingredient that most of us love! You can always look for soy milk with the least amount of additives but I prefer almond milk. Although most almond milk also contains additives, it’s easier to find almond milk brands with little to no additives. Also, most people seem to prefer the taste of almond milk. The downside of almond milk is that tons of water is used to make it. Almonds are a water-needy crop predominately grown in California, which is currently experiencing a horrific drought. In regards to its environmental impact, making almond milk actually uses a tremendous amount of water, similar to making cow’s milk. This is mainly due to almond milk’s rise in popularity—the current high demand has increased its production. Less popular milk alternatives like coconut milk and rice milk are available but they tend to separate in coffee and are not used in most coffee shops. Due to a combo of texture and accessibility, soy and almond milk are your main options for non-dairy milk in your coffee.

Not to be a dairy downer in your caffeinated world but when it comes to milk it’s basically about picking your poison. It’s hard to drink any milk with a completely clear conscience or without taking some health risk. Still, each one of us has to find a way to balance our own desires and habits with our food ethics. Like choosing decaf or regular, there are different consequences to what milk you choose to dilute your coffee with. But learning more about your milk of choice and considering drinking it in moderation is always a good idea. If you do decide to be “cool” like me, try drinking pour-over coffee without milk—you’ll at least appreciate how well you can distinguish the different tasting notes before the acidity and boldness kick in!