Home › Blog › History of Boulder › Why Shootings are Discussed, then Forgotten

Why Shootings are Discussed, then Forgotten

In light of the recent tragedy in Colorado Springs, we would like to discuss some shootings that took place in Boulder County.  Then we will share some thoughts on why shootings explode into social consciousness and then, just as quickly, expire.

Despite it’s consistently high rankings on “best places to live” lists around the country Boulder is not free from violent crimes, nor from shootings associated with them. Whether it is the police pulling the trigger or regular citizens the effect on the community is the same. There is no time to brace for a bullet. There is no consolation to the families of the injured and, especially, the deceased.

The most plentiful gun related injuries and/or deaths reported in Boulder are those of criminals who were shot by police. In May 2014 Boulder police shot Stewart Coleman after a standoff on the University Hill. Coleman had a standoff with police and when he threatened them with a pellet gun from his window they  feared for their lives. He was hit in the arm and leg, but survived the encounter.

November 2013 saw the death of Michael Habay. Habay was standing outside the Wimbledon Condominiums (where he lived) while “stabbing a post” just outside his residence with several knives and a machete. He was also, reportedly, threatening people.

March 2008, Terrance Baughman claimed to be wearing a bomb inside the Boulder Community Hospital. He was shot and killed by a member of a SWAT team.

Samuel Zorgy got high on LSD in July 2015 and removed all his clothes. Then naked, he attacked a man with a knife at his apartment complex on 19th street. Police were called in to stop him, and he brandished a hammer at the time of the encounter. He failed to yield to their directions and was shot three times after a failed attempt to taser him. He was pronounced dead on the scene. 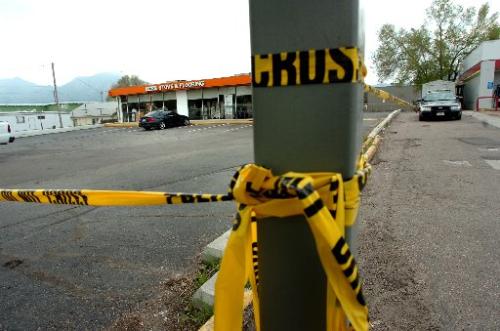 But not all these gun deaths are created by police. May 2010 police were called to investigate shots heard at Boulder Stove and Flooring on 30th and Valmont. They walked through the unlocked front door to find 3 people dead from gunshot trauma. Rob Montgomery had killed Sean and Staci Griffin, owners of the store, before turning the gun on himself. Montgomery was a disgruntled employee of the couple running the store at the time. Montgomery left only a computer full of nude, edited images of himself. The Griffins left behind their 13 year old daughter.

Another double-homicide suicide occurred on Memorial Day 2014 when Phil DiLeo killed his wife Elizabeth and son Phillip before shooting himself. The investigation reveals that the crime had been premeditated: DiLeo had left a note explaining his preferred funeral arrangements for the family.

If these examples are overwhelming, they should be. Boulder‘s gun crime rates are very low for the state as a whole, but that doesn’t make each crime less traumatic. Some may try to push tragedy like this out of their lives. After all, it is exhausting to deal with. But this desire for simplicity is no excuse to act surprised when gun death rears its head again. It is not new, nor is it extraordinary. The horror of gun death is its closeness. And there is the opposite temptation; to blow it out of proportion, and call a recent shooting unusual. In order to reduce shootings we must admit to their regularity, their proximity, and our real fear of them. Pushing frightening events out of view or exaggerating them to absurdity are both strategies to lessen the impact of terrible news. But until we acknowledge the guttural aversion to these events and to our responsibility as a community to lessen the probability of these sad stories, no solution is available.

Joe Inclan
Originally from Lone Tree, CO, Joseph Inclan graduated from Regis Jesuit High School in 2010. He applied to just two universities, DU and CU Boulder, and was accepted by both. Joe chose CU for its beauty, and the appeal of the open-minded and quirky city ensured him how right he was to choose Boulder. With a Bachelor’s degree in both English Creative Writing and Philosophy from CU, he has dabbled in everything from poetry to basic technical articles for 3DPrintingIndustry.com. His hobbies have a range too, from fountain pens and handwriting, to yoyos and skill toys. The most important thing for Joe is to understand things complexly. Boulder and its residents live in an evolving miasma of ideologies and cultures which demand more than a 2-Dimensional perspective. Joe’s fascination with Boulder stems from the fact that it is far more than the sum of its parts, and that is a unique quality. He is glad to be a writer with AboutBoulder.com and looks forward to spreading his knowledge of Boulder with the community.
See More Articles From Joe Inclan
Tagged: About BoulderaboutboulderABOUTBoulder.comboulderboulder coloradoBoulder CountyCollegeColoradocommunitycontrolcrimeCUdeathsgunhomicidelocalshootingssuicide
Boulder Colorado Air Quality