If there’s one thing that residents of Boulder do well, it’s keep in shape! Boulder has regularly been ranked by Gallup and Healthways as the fittest metropolitan region in the United States, with just 12.4% of its residents considered overweight.

Gallup and Healthways have been measuring obesity rates across the country since 2008 through the Gallup-Healthways Well-Being Index, which surveys Americans’ self-reported height and weight to measure their Body Mass Index. In five of those six years, Boulder has taken the number one position for fitness (let’s just call 2009 a “cheat year”). 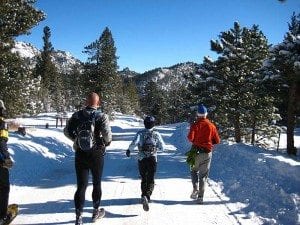 On the opposite end of the spectrum is the Huntington-Ashland region, a metropolitan area that includes counties in West Virginia, Kentucky, and Ohio. This area is considered the most obese region in the country, with approximately 40% of its residents qualifying as obese.

Colorado was rated as one of the two fittest states—the other being Montana—and the mile-high state is home to three of the top ten least obese metropolitan regions: Boulder, Denver-Aurora, and Fort-Collins-Loveland. Of the189 metropolitan areas surveyed, Boulder was the only area with an obesity rate below 15%.

On a national scale, the rate of obesity is now 27.1%, which is the highest on record since Gallup and Healthways began conducting the survey. Dan Witters, research director of the Gallup-Healthways Well-Being Index, called their study a “call to action,” and said that it is, “…increasing public awareness around this.” He added, “Where obesity is really high, it can skyrocket the health care utilization.”

According to Gallup, residents of Boulder spend approximately $56 million annually in health care costs that are obesity-related.  This can be compared to a city like Evansville, Kentucky, which is of a similar size and has an obesity rate of 38%. The health care costs in Evansville are about $190 million per year, nearly four times as much as Boulder.

According to Witters, residents of cities with low levels of obesity demonstrate healthier behaviors; they smokeless (well, in Colorado’s case, at least they smoke less tobacco), they eat healthier food, and they exercise more. He also added that a “healthy attitude” is a major contributor to a city’s fitness. Boulder residents are known for their positive attitudes and healthy diets, so it’s no wonder that they tend to be so fit.

In case all of this has left you feeling a bit intimidated, as it has for me, and you’re looking for an opportunity to get a little fitter, I’d recommend taking part in the upcoming BolderBoulder, an annual 10K which Boulder will be hosting next month on May 26th!