Home › Uncategorized › What Are You Gonna Do About It?

What Are You Gonna Do About It? 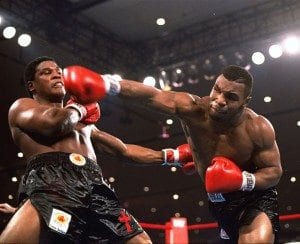 Imagine looking across the ring to the opposite corner. You are seconds away from the opening bell. You are trembling. You are nervous. Your opponent is Mike Tyson – “Iron Mike”. Probably the most ferocious heavyweight fighter to ever set foot in the ring. He is a predator. He attacks people in the ring. His eyes are penetrating the depths of your soul. You have a distinct feeling that he wants to severely injure you. He does.

Tyson has not fought in years, but he is still a fighter. The aggressiveness that took him to the top of the boxing world is still very apparent – even in interviews, as Nathan Downer found out a few weeks ago. Downer was interviewing Tyson about his new show. He decided to ask a question that just about landed a strong right to his own chin. He asked Mike a question that made him visibly angry. Tyson snapped. Luckily, he stayed seated, but the verbal assault began. Tyson felt ambushed. He was backed into a corner. “Iron Mike” snapped into fight mode. Tyson’s language got a tad “colorful” and Downer reminded Tyson that he was on “live television”. In classic Mike Tyson fashion, he responded with, “I don’t care. What are you gonna do about it?”

I am not sure about you, but if Mike Tyson asked me what I was going to do about it, the answer is: nothing. Mike was challenging Downer. He was ready to fight.

How often does this happen in life? Somebody corners us. Something does not go our way. We feel defeated. We are faced with a “fight or flight” moment. This is precisely when we must ask the question Tyson asked Downer: “What are you gonna do about it?”

To do great things, adversity is a necessity. To grow you must be challenged. You must get knocked down on occasion. The biggest opportunity in the world is staging a comeback. It is that moment when everybody would understand why you gave up, but instead you fight your way back into the spotlight. You fight for what you want. You confront your challenges head on like Mike Tyson.

The next time you are tested, stand up tall. Confront your situation. Fight for what you want. Put your gloves on and go on the attack. Take the Tyson approach. Any time something does not go your way, do not sulk. Accept the challenge. Do not get defensive. Attack. Stare your challenger square in the eyes. Do not back down. Have the internal confidence to know that no matter what happens, you will keep moving forward.