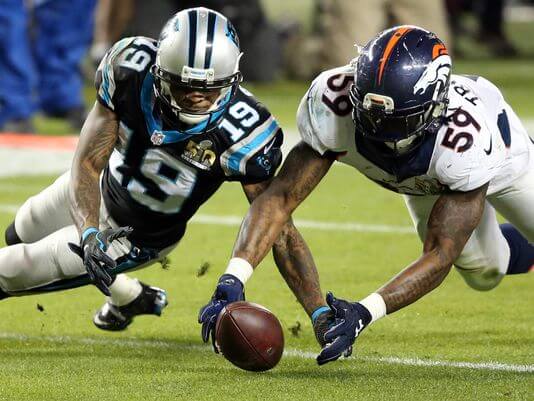 After winning Super Bowl 50, Gary Kubiak, the Broncos’ head coach goes on record to say, “we grinded all year and we just had to do it once more”.

Kubiak just gave everybody an insight into the mind of a champion.

You see, The Broncos’ season was nothing like the Panthers’. The Panthers destroyed teams and then danced all over the field like children (by the way, I would’ve danced just as much as Cam. Judge all you want.) Their victories were spectacular. They scored points at will. They dominated. Everything they did was stylish.

Peyton Manning was not the same Manning of recent years. The offense wasn’t explosive. They didn’t score points at will. Peyton Manning was not in the shotgun hollering “Omaha” and hot-routing all of his receivers’ right up to the end of the play-clock like usual. He wasn’t running the most fascinating offense in the NFL anymore. When he wasn’t fighting though injuries, Peyton Manning’s role was limited to the “game manager”.

Gary Kubiak wasn’t concerned with individual performances, however. He was concerned with winning a Super Bowl. He had singular focus. He had a purposeful obsession. He knew that a Super Bowl victory would take the right mentality.

Becoming a “grinder”, as Kubiak all but patented, meant that all of his players surrendered to the process. It meant that they trusted that if they gave it their all, every week, every rep and every film session, the results would take care of themselves.

Victories weren’t sexy for them. They didn’t have the high-powered offense of recent years. They ran a boring and strategic offense, designed to rest the defense and chew up clock. This was the strategy they took all year. They knew Peyton wasn’t the same Peyton but, they knew they could still grind their way to a championship. And they did.

A lot of people don’t recognize this principle in their lives. You’re not going to win at everything you do, but you can always GRIND. You can always better yourself. You can always improve and build upon your habits. Sheer persistence and relentlessness can overcome all of the setbacks you will encounter.

Grinding is more than just hard work. Grinding means doing what you know you should do, especially on the days that you don’t want to. It’s not glamorous. It’s not pretty. It’s the part of success that so few people talk about. Nobody gets to the top without years of grinding.

Overnight success is a fairy tale. It just doesn’t exist. Incredible results are a function of the intensity and duration of your grind. That’s it. Results are never immediate. You must be patient. You must trust the process. You must grind.

Remember the words of the legendary Muhammad Ali, who believed that the work you do in silence, when NOBODY is looking, is the real difference-maker:

“The fight is won or lost far away from witnesses – behind the lines, in the gym, and out there on the road, long before I dance under those lights.”

The Broncos had their opportunity to “dance under those lights”, but remember what it took them to get there. It took hours upon hours of hard work. It took heartbreaking losses, countless setbacks and days of self-doubt and criticism. They fought through all of that and emerged victorious. They were focused, disciplined and committed. They taught everybody the importance of surrendering to the process and becoming, a grinder.