If you’ve spent an evening in Boulder since November 11, then you have noticed the giant, lighted star outline on the western face of the Flatirons. What you might not know is how one simple holiday tradition became a hotly contested issue for Boulder citizens, and a medium of political commentary.

The Flagstaff Star was originally displayed in 1947 but the Boulder Chamber of Commerce, who still own the start to this day. It was meant as a simply Christmas decoration aimed at uniting Boulder in the spirit of the holiday. The next year, the star began to transform. Shifting between a Christmas star and a Cross for Easter each year for two decades.

The shenanigans continued with the first case of vandalism. In 1951, Colorado A&M (now CSU) rearranged the Boulder star into a letter “A” as a prank. This was later followed but the Colorado School of Mines’ students changing the star into a letter “M” in 1958. Luckily, these pranks were harmless.

The conflict centering around the start grew in the 1960s. Several times the incandescent bulbs of the star were painted red by the hands of “suspected communists”. The star and the bright red color are obvious communist symbols (China’s national flag is a great example). And in the post-McCarthy USA, where Communism was considered diabolical, this was a serious political play by those suspected communists. Luckily, it now takes far more than painted lightbulbs to make a “victory” for any political party.

In 1969 the string of lights was changed into a peace sign by the Chamber of Commerce, which was a nice break from the alternating Star and Cross arrangements. But that year a complaint was filed to the Boulder Human Relations Commission that the Star and Cross were overt symbols of Christianity. Displaying such signs on public land was a violation of the separation of church and state. The debate continued for two years until the Cross was permanently discontinued. But Boulderites could not let the star go because it was a unifying symbol for Boulder throughout the holiday season. (Plus a star isn’t only a Christian symbol). 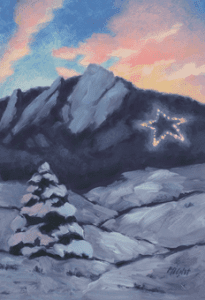 The 1980s saw more action surrounding the star. As a sign of respect and acknowledgement to the American hostages being held captive in Iran, the Flagstaff Star remained lit into the month of February. Local environmentalists soon removed the bulbs from the string of lights and slashed the wires connecting them. They claimed the incandescent bulbs were disturbing local wildlife and wasting energy. Inspired by this well-intentioned, (hyperbolic) vandalism, the Boulder Chamber has replaced the original 365 incandescent bulbs with low-energy LED bulbs and ensures that the electricity needed for the star is harnessed from wind-power.

We hope this surprisingly turbulent history of the Flagstaff Star has intrigued you today. During the holidays, with all their glitz and glamour, it’s good to remember that the simple and beautiful things in our lives can have complex stories behind them. If you liked this article, or have your own ideas for an article, drop us a comment below. Happy Holidays Boulder!

For more info about the star and the fund which keeps it shining, click here. Big thanks to local artist Lori Hight who designed this year’s Star Card!