Getting Set for BolderBoulder

There’s a reason that every year, over 50,000 people flock to Boulder, Colorado to run 6.2 miles. It might have something to do with the fact that Boulder is an awesome city or maybe some folks enjoy a bit of fitness every once in a while… But mostly I think it’s because they know that the BolderBoulder 10k is the most fun you’ll have while running all year long!

To some of you reading, 6.2 sounds like a daunting number. Others might find the prospect of running non-stop uphills and around bends totally boring; but trust me–it’s not as intimidating as it sounds and it’s far from boring! (I wouldn’t lie to you!) In fact, I’m pretty confident it is the all-time best race you will ever run! Still don’t believe me?

The entire city comes together on this day to run and celebrate the start of summer together. For 6.2 miles, local bands and musicians gather to entertain and motivate you under the late May sun. You might find impromptu dance parties and conga lines, children standing on the sides handing out water, marshmallows, and spraying runners with hoses. A giant slip-n-slide is ready in one neighbor’s driveway (which you most certainly have to slide through!) and college students host yard parties to cheer runners on by passing out bacon and beer. 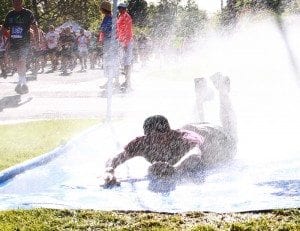 I’ve ran the BolderBoulder for the last three years and the costumes I see never cease to amaze me! The standard running attire is as eclectic as Boulder itself; people of all ages dress in a variety of attire. A Waldo wearing running shorts zips through the crowd. A woman wearing her wedding veil stretches with bridesmaids in matching tee shirts at the starting line. Was someone dressed in a gorilla suit just chasing a banana? A mix of tutus, neon colors, and official Bolder Boulder shirts swarm around getting ready for their wave, smiling, laughing, and cheering others on.

By the end of the race, you are welcomed into Folsom Field by a cheering crowd as you run your victory lap. Across the finish line you toast to your accomplishment with a cold beer (if you’re of age, of course!) and a plethora of snacks and treats from local companies. Be sure to take a finisher’s photo before you enter Folsom to find some seats!

As the run comes to an end, runners and non-runners alike fill the stadium to watch the elite runners compete in the official race. Prepare yourself to watch these guys and gals run at superhero speed, finishing the 10k with times like 24 and 28 minutes (Uh, my fastest time was 58 minutes…) Following the elites, the stadium pays homage to local veterans and fallen heroes with a fly over and parachuters representing each branch of the military.

And at the end of the race, the party doesn’t end as the stadium packs up and heads back out into the city to enjoy a late lunch on Pearl or walk along the Boulder Creek Festival. It truly is a happy day, where the Boulder community opens up its city to runners and tourists and comes together to enjoy what Boulder does best: fitness, the outdoors, and having fun. 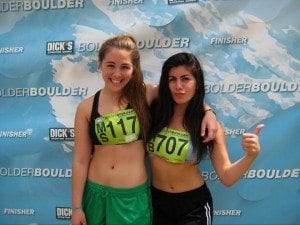