Boulder’s Terrifying Mascot from the 1980s!

Meet “Buddy Boulder,” the mascot proving that even the gleaming citizens of Boulder sometimes make bad decisions. Or eerie ones at the very least.

How was this grinning stone created? Well, in 1984 the Boulder Hotel and Motel Association had a “Mascot Mania” event whereby people were allowed to submit mascot ideas for the city of Boulder. The winners received cash prizes. You would think money would be incentive to create something inviting and recognizable. Sure, Buddy has the Flatirons on his head, but we just can’t stop looking at his cold, shifty, doll eyes. 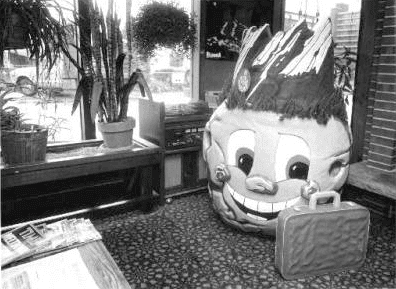 The point of the mascot was to create a positive icon to attract more visitors to Boulder. The judges for the contest looked for a “positive, upbeat image of Boulder that was visibly recognizable and could represent the city not just this year, but 20 years from now.” Buddy appeared at the Crossroads Mall, and at the ribbon cutting for the Hotel Boulderado expansion, but was collecting dust within two years of his conception. 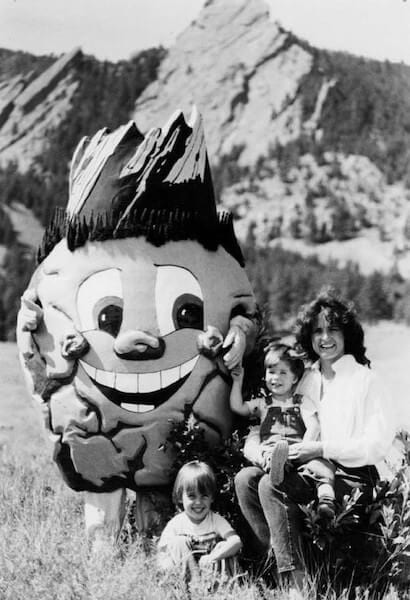 How did Buddy move around? Well the photo above is actually a costume. Yes, someone had to wear this thing. Apparently getting through doorways was nearly impossible. The complete costume included that odd stone briefcase (visible in the top photo) and Puma brand running shoes. The lightweight footwear failed to help the Sisyphean cause of making this mascot cool.

Buddy’s brief autobiography was meant to be: “The fact that I am a solid citizen is taken for Granite and none of my friends are flakes…. I never get stoned,” according to his creator John Neiley. John was a CU law student at the time of winning the mascot contest. We hope he laughed all the way to the bank with his $200 winnings.

So Boulder no longer has a mascot, but maybe we should. If you have an idea for a new mascot for Boulder please tell us in the comments section below! Or if you think one mistake is enough just leave us a creepy smile.