A Sound Strong Enough To Crack The World 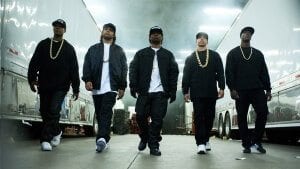 Straight Outta Compton is really two movies stitched together. The first movie is intense, angry, joyful, and it’s about a group of friends trying to escape the madness of a racist society through art. There’s a couple of scenes in the beginning that encapsulates that perfectly.

First, young Ice Cube (O’Shea Jackson Jr.) sits on a school bus, writing lyrics in a notebook. He’s in South Central Los Angeles, ground zero of America’s failed war on drugs. A few seats up, a group of kids are yelling playfully at a car driven by a gangbanger. The gangbanger does not like this. He proceeds to block the bus with his car, invade the bus, and hold one of the kids at gunpoint while delivering a motivational speech. Ice Cube watches this madness, shocked, but you can see he’s taking it all in, filing away the experience to use for later.

Second, we see Ice Cube leaving the home of his buddy Dr. Dre (Corey Hawkins). Directly outside the house, the police are performing an arrest. They see Ice Cube and immediately start roughing him up, harassing him, all for the crime of walking while black.

The second movie is a more standard biopic, examining how difficult it is to be rich and famous. Most music biopics, from Walk The Line, Ray and The Doors, have obligatory scenes where the artist is filthy rich, struggling with the creative process, and getting screwed over by managers/friends/spouses. The second movie is no different, and while it remains interesting, it has a nasty habit of meandering.

Straight Outta Compton chronicles the rise and fall of influential rap group N.W.A., formed by Ice Cube, Dr. Dre, Eazy-E (Jason Mitchell), DJ Yella (Neil Brown Jr.) and MC Ren (Aldis Hodge).* Chuck D once said that, “Rap is our invisible TV network. It’s the CNN that black people never had.” With their 1988 debut album, Straight Outta Compton, N.W.A. was one of the seminal groups in the formation of hip hop and gangsta rap. With tracks like F–k tha Police and Gangsta Gangsta, they were not only hailed as gutsy truth-tellers willing to use art as a reflection of their reality, but also demonized by the police, F.B.I., and citizen groups for the glamorization of violence**and misogyny.

Their manager, Jerry Heller (Paul Giamatti), is a weasel. But he’s a really interesting weasel. Heller takes Eazy-E under his wing, and despite screwing him and the other members over with shady accounting, Heller genuinely believes in the group. There’s a scene where N.W.A. is (again) being hassled by the police for no reason after a recording session. Heller sees this and verbally assaults the police, something his clients would be loathe to do for fear of getting shot while “resisting arrest.”

So let’s talk about the negatives first and, thankfully, there aren’t too many of them. The film runs long, 147 minutes, and there are times you feel the drag. At times, it feels a little like a Hip Hop 101 class, where we have brief cameos from Snoop Dogg (Keith Stansfield) and Tupac Shakur (Marcc Rose). There’s also a subplot where Dr. Dre falls under the influence of Suge Knight (R. Marcos Taylor). Knight is portrayed as a figure of Satanic evil, a guy who beats the hell out of a stranger for daring to park in his spot. Is Knight really that evil? Yeah, probably, but the film does such a good job of humanizing most of the other characters that it feels like it neglects Knight.***

For a film with such a long running time, director F. Gary Gray keeps the epic moving along. Gray is a solid director that’s made some pretty good films, such as Set It Off, The Negotiator, and the remake of The Italian Job. This film is straight up myth-making, charting the group’s rise and portraying their effect on pop culture, music and society. That’s not a bad things, since the nature of the biopic is myth-making, but it’s great that Gray tries to show his characters as vulnerable and fallible human beings. The script by Andrea Berloff and Jonathan Herman is also well done, and there are only a few scenes that blatantly shoehorn in fanwankery, like Ice Cube chuckling over his screenplay for Friday.

Ultimately, a biopic lives or dies by performances alone, and Straight Outta Compton has some great ones. Jason Mitchell’s Eazy-E is potentially the best. He finds the beating heart of the guy who moves from drug dealing to music mogul. His AIDS subplot is a little Oscar bait-y, but Mitchell shows us a man who is standing between two musical titans, and simply is using rap as a way out of crime.

O’Shea Jackson Jr. is the son of Ice Cube, and it’s spooky how much he looks like his old man. You know how Ice Cube has two expressions-the hard glower and the goofball grin? Not only does Jackson capture those perfectly, but he also captures Ice Cube’s formidable intelligence. He’s the hero here, the John Lennon of the group, the blazing idealist.

I’ll continue to beat the Beatles metaphor to death by saying that if Ice Cube is Lennon, then Dr. Dre is McCartney, the business and musical genius. Corey Hawkins does good work, but his character is strangely passive. Without question, he believes everything that Heller tells him, then he believes everything Suge Knight tells him. The film portrays Dr. Dre as a guy that just cares about the music, but we don’t see too much of the financial acumen of the man who sold Beats to Apple last year and pocketed over $600 million.

What about DJ Yella and MC Ren? Well, they’re…um…there. Two guys, pushed to the sidelines, forever in the background. They had an important part to play in N.W.A., but they’re never in focus. Somewhat like The Doors, since nobody really cares about drummer John Densmore. Sorry, John, but them’s the breaks.

If you’re a fan of rap and hip hop, odds are you’ll love Straight Outta Compton. If not, you’ll still enjoy it with the great performances and excellent filmmaking on display. As someone who came to appreciate rap at an advanced age, I loved the energy here. However, if you take off after Ice Cube leaves the group, you’re not missing anything hugely important.

*Arabian Prince was also a founding member of N.W.A., but the movie pretends he doesn’t exist. That can’t feel good.

**Ironically, many of the same people vilifying N.W.A. are big fans of Johnny Cash singing about killing people.

Tim Brennan
Tim has been alarmingly enthusiastic about movies ever since childhood. He grew up in Boulder and, foolishly, left Colorado to study Communications in Washington State. Making matters worse, he moved to Connecticut after meeting his too-good-for-him wife. Drawn by the Rockies and a mild climate, he triumphantly returned and settled down back in Boulder County. He's written numerous screenplays, loves hiking, and embarrassed himself in front of Samuel L. Jackson. True story.
Tagged: andrea berloffcorey hawkinsf gary grayjason mitchelljonathan hermannwao'shea jackson jrstraight outta compton