Home › Blog › Movies › Between A Rock And A Shark Place

Between A Rock And A Shark Place 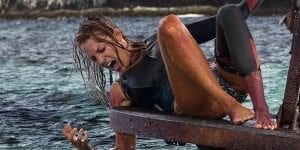 She’s on a secret beach in Mexico, and it is beautiful. As she looks out across the water, she sees a small island. Its contours remind her of a pregnant woman. Fitting, really, considering why she’s there.

Her name is Nancy. She’s on her way to becoming a doctor. Well, she was, anyway. Her mother was diagnosed with cancer, not the kind of cancer you get better from. She fought hard but succumbed in the end. Maybe it wasn’t worth it. Now Nancy is here, on this secluded beach, trying to come to terms with this seismic event.

But why here, at this particular place? We so often follow the patterns of our parents, and Nancy’s mother stood on these sands when she was newly pregnant. Maybe Nancy is looking for a sense of connection. Maybe she’s drawn to the ocean itself. Our ancestors crawled out of the waves, and we’re composed of about 60% water, so it’s not surprising the pull is there.

Despite that pull, we forget that the ocean is not our natural habitat. We’re slow, unprotected. Easy prey.

The vast majority of shark movies are godawful. I can count on one hand the number of movies that really sell the concept of us dropping off the top of the food chain. Jaws. Open Water. If I’m being really charitable, maybe Deep Blue Sea.* But most shark flicks are terrible, just Sharknado-level bad.** That’s why I’m so thankful for The Shallows, a well-made shark movie with minimal foolishness and a strong emotional throughline.

Blake Lively is Nancy, and she’s dropped out of medical school and has gone on walkabout to process her mother’s death. She’s traveling through Mexico with a friend, but her friend is an unreliable flake who blows off the pilgrimage to the beach in order to nurse a hangover. A kind local, Carlos (Oscar Jaenada), gives her a ride to the secret beach. Back in the day, Nancy’s mom surfed there. Now Nancy will catch some waves and try to heal. Her father (Brett Cullen) and sister (Sedona Legge) are worried about her throwing her life away out of grief.

While catching her last wave of the day, Nancy notices the mauled carcass of a humpback whale. Unfortunately, a great white shark that’s about the size of an SUV notices her. It pursues her and takes a chunk out of her leg. She just makes it to a rocky outcropping that’s 200 yards from shore. It’s close, but maybe not close enough, and the shark is waiting for her.

As you probably guessed, The Shallows is basically “What if the girl in the beginning of Jaws fought back?” As movie concepts go, that ain’t bad. It’s not a horror movie, though, it’s a woman vs. nature movie, and it’s a lean and stripped down one at that. Clocking in at 87 minutes, the film doesn’t screw around. There’s decent character development, and we see that in the form of smartphone photos and a FaceTime call with Nancy’s family. But the vast majority of the film focuses, as it should, on Nancy doing her damnedest not to become shark chow.

Apparently, the previous draft of Anthony Jaswinski’s screenplay contained numerous flashbacks, presumably dealing with the relationship between Nancy and her mother. Those were wisely removed. In a film like this, you want just enough backstory to augment the characters, then the actors can do the rest of the heavy emotional lifting. Sustained scenes away from the lagoon would have sucked out all of the energy. It’s no wonder this script was on the 2014 Blacklist, the list of the most highly regarded unproduced scripts. Like the shark, it’s muscular, efficient, and never stops moving.

Jaume Collet-Serra was a good choice to direct. He’s mostly known for the underrated horror flick Orphan and the entertainingly ridiculous Non-Stop. Collet-Serra is a really weird director. He’s someone who fluently speaks the language of film, and he’s highly talented when it comes to staging a scene, ratcheting up tension, and clever character moments. So does he use this talent to make art films commenting on the human condition? He does not. He instead makes somewhat low-budget b-movies where Liam Neeson punches people in the head. The Shallows is maybe his artiest movie, where we see sweeping shots of turquoise blue water, and slick scenes of iPhone photos edited within shots. Collet-Serra is making exactly the kind of movie he wants to make, and he’s willing to go big and goofy at times. Should he have held back? Yeah, but only a little.

But the film would fall apart without Blake Lively. It’s a shame that she’s carried the unearned reputation as being a lightweight actor, and people forget how good she was in The Town. She shakes that off here with one of the best pure action performances I’ve seen since Mad Max: Fury Road. Lively doesn’t have a ton of dialogue, she’s mostly physical here. However, she’s excellent at showing us she’s thinking. Nancy is a sharp cookie. After she’s gotten nibbled on, she uses her earrings as sutures and ties off the sutures with her necklace. She sells that innate intelligence and problem-solving ability.

A lesser film would give her a romantic subplot, some hunky guy to commiserate with while being menaced by her toothy nemesis. Instead, she shares the hunk of rock with an injured seabird. Nancy names it, and I swear to God I’m not kidding, Steven Seagull. Even more bizarre, the gull has a weird kind of charisma, and I was legitimately interested in its survival. It’s not silly CGI, it’s just a bird that’s stuck on the rock with Nancy. While it’s not her pet, she does care for it, and her relationship with it is genuine and heartfelt.***

However, I hear what many of you are saying. “I don’t care about her psychological turmoil or her moment of grace with a dead-eyed seagull. How’s the shark?” Overall, the shark is good. Collet-Serra took an important lesson from Spielberg, and for probably 80% of the movie, we only see glimpses of the beast. We’ll see shots of the fin knifing through the water and overhead shots showing its monstrous size, but it’s not until the end of the film that we behold the beast in all of its glory. Some of the CGI is a little dodgy, but it’s real enough. Does the shark behave like a real shark? No, and I don’t care at all about that. Maybe it stalks her because she intruded on its hunting grounds, or out of vengeance, or because it hated Gossip Girl. That’s where suspension of disbelief comes into play. If you can buy the concept of Captain America or the idea that people think Adam Sandler is funny, you can buy into this.

The Shallows is a well-made summer treat. It has plentiful suspense, just enough gore, and a main character that’s as tough as a coral reef. The film does what it needs to do, and it does it swiftly and brutally.

*But mostly for having one of the greatest kills I’ve ever seen in a movie. If you’ve seen it, you know the one I mean.

**”But it’s supposed to be bad,” I hear you saying. I get that, but with so many good movies out there, why would you waste time watching an intentionally crappy movie?

Tim Brennan
Tim has been alarmingly enthusiastic about movies ever since childhood. He grew up in Boulder and, foolishly, left Colorado to study Communications in Washington State. Making matters worse, he moved to Connecticut after meeting his too-good-for-him wife. Drawn by the Rockies and a mild climate, he triumphantly returned and settled down back in Boulder County. He's written numerous screenplays, loves hiking, and embarrassed himself in front of Samuel L. Jackson. True story.
See More Articles From Tim Brennan
Tagged: anthony jaswinskiblake livelybrett cullenjaume collet-serraoscar jaenadasedona leggethe shallows