Home » Blog » News » The Fight for Gender-Neutral Cafés in Pakistan

The Fight for Gender-Neutral Cafés in Pakistan

A group of bold women in Pakistan are fighting to desegregate public spaces, one cup of chai at a time.

Roadside tea stalls or coffee shops in Pakistan—known as “dhabas”—are generally unwelcoming to female patrons. In various parts of Southern Asia, it is culturally unacceptable for women to frequent public spaces or communal spots regularly. In these painfully patriarchal rural and urban communities, women are not encouraged to socialize publicly or move around on their own freely. But Desi feminists are fighting against these sexist standards by claiming typically segregated places like roadside cafés.

Their movement, which has gone viral with the hashtag #girlsatdhabas, involves the simple but daring act of sharing a photo of oneself while drinking chai at a tea stall. By posting pictures of themselves sipping chai or eating breakfast on social media, Girls at Dhabas are rebelling against rigid double standards, while also showing other women in the region that they have the right to enjoy leisurely and social activities too. 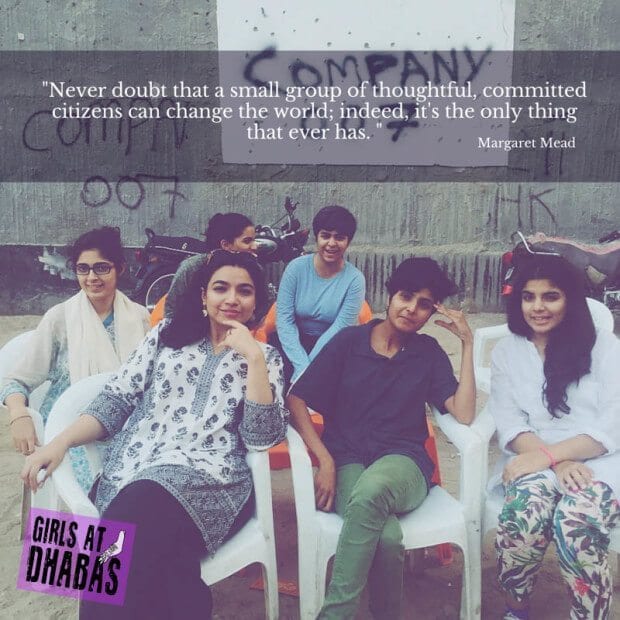 Although in Western countries we have our own gender struggles to deal with, it is vital for us to stay aware of women’s rights around the world and stand with our fellow feminists. I raise my coffee cup to Desi women who are asserting themselves and fighting for equality!

For more information on Girls at Dhabas, read about them at Broadly and then head over to the #dhabaforwomen Indiegogo campaign to support these badass broads in their mission to open the first female-owned and operated dhaba in Karachi, Pakistan.