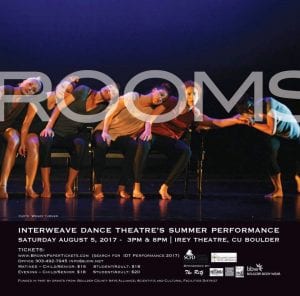 At the end of the Boulder Jazz Dance Workshop, the resident dance company, Interweave Dance Theatre, put on the show “Rooms,” using both students and faculty from the workshop as dancers. Local choreographers and choreographers from the workshop created work for this performance. Before the show began, a stone castle was projected onto the back screen. As the performance progressed, the audience got an intimate look into the rooms of the castle.

Here were a few of my favorite rooms:

“Mystery,” along with several other pieces in the performance were inspired by the board game, Clue. The choreographer, Kari Herman, created a scene akin to that out of a murder mystery novel. Characters dressed in feather boas, safari hats and other dress-up costumes to create a dance of chaos as they all tried to pin down which one of them was the murderer. Characters ran on and off stage, fell to the floor dead and searched for clues without a word of dialogue. This dance showed the power of gesture and motion in creating a scene.

Even the length of the piece fit into a closet shaped space. It was short and sweet, timing in at about a minute long, but the choreographer, Allison Blakeney, showed that a piece does not need to be long to pack in emotional depth. In the solo, Blakeney stripped off her shirt to find something to wear to come out of the closet. She decided on a sparkling red shirt. When she is about to leave, two dancers dressed in black violently ripped the shirt from her, wrapped her in two straps and dragged her limp body back into the closet. To me, the piece shows the harsh reality of coming out for those in the LGBTQ+ community.

Lara Branen, choreographed the piece alongside her dancers to create a piece that mimicked a twisted fairy tale. The woman trapped in the tower acted as both a princess and a siren for the unsuspecting prince who comes to rescue her. The piece is a dance of courtship and entrapment. Fall for the princess in the tower and she will be free and you will be imprisoned. 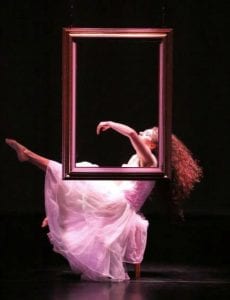 In her piece, Jenny Schiff used the voices of the dancers as a part of her choreography. The dancers whispered on stage and though I could not make out what they were saying, the whispers seemed like thoughts that people are afraid to think or speak. Though the dance as a whole was fast paced, the movements were punctuated by moments of jarring stillness and soft whispers as the dancers stared into the audience.

A black and white picture of a family lounging on a couch was projected onto the screen in front of a couch. When the picture faded away, the dancers came onstage and melted into the same pose as the family in the photograph. The dance was playful. The performers danced through their day with the couch as the main object of both rest and stress. The dancers fought and supported each other like a family before melting back into the couch at the end, exhausted. 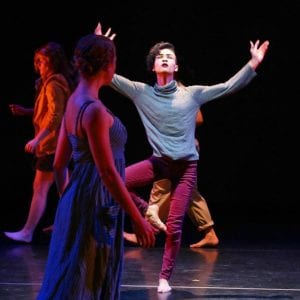 Julia Bartlett
Julia Bartlett is a Massachusetts native who traded the ocean for the mountains. She is currently a graduate student at CU Boulder pursuing her MFA in Creative Writing. She seeks to make her MFA interdisciplinary by taking choreography courses as well as writing workshops. She has created dances that have involved locking herself in closets, slashing lipstick all over her body and becoming a nature spirit. Her work has been performed at CU Boulder and the Riverside Events Center. She is also a certified Reiki practitioner and is building her practice in Boulder.
See More Articles From Julia Bartlett
Tagged: boulder dance
Boulder Colorado Air Quality