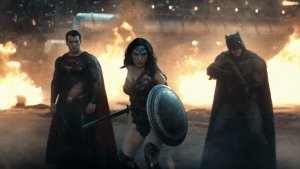 The age of the superhero arguably began in 1938,  when Jerry Siegel and Joe Shuster created Superman. Slightly less than a year later, Bob Kane and Bill Finger devised Batman.  Both characters have passed their 75th anniversaries, and both of them have appeared in pretty much every entertainment medium.

They have changed a great deal over the years. We’ve seen iterations of Superman as a paternal authority figure, a socialist crusader, and a Soviet hero. We’ve seen Batman as a revenge-driven psychopath, a bloodthirsty vampire, and a pop art goofball. Like any timeless character, they’re malleable enough to fit different times and imaginations. But certain aspects generally stay the same.

Superman is compelled to help. He’s a strange visitor from another planet, raised in America’s heartland. He’s the embodiment of the immigrant experience. Even during moments of tragedy or rage, there is a core of decency in Superman. He takes the time to help and does the right thing because it’s the right thing to do. Batman is compelled to punish. He witnessed the senseless murder of his parents, and dedicated his life to waging war against criminals, a superstitious and cowardly lot. He uses fear as a weapon, to ensure no more orphans will be left alone in alleys, surrounded by blood and pearls.

Those aren’t tough concepts to wrap our brains around, right? It’s apparently a problem for director Zack Snyder. He’s made Batman v. Superman: Dawn of Justice, and it’s a movie that’s overstuffed, poorly written, and that actively hates one of the title characters.

There’s a lot of plot to get through, so strap in, guys. The film begins with the murders of Thomas and Martha Wayne. Yes, again.* We then flash forward to the Battle of Metropolis, which was originally the climax of 2013’s Man of Steel. The world is introduced to Superman (Henry Cavill), as he battles the villainous General Zod (Michael Shannon), and half of the city of Metropolis is leveled. Here, we see the fight from the street-level POV of Bruce Wayne/Batman (Ben Affleck). He sees the superhuman combatants demolish buildings, and he desperately tries to reach the Wayne Industries building to save his employees. Dozens of his professional family are killed. They’re collateral damage, and Superman and Zod are so caught up in the heat of battle that it’s doubtful they even notice. But Wayne notices.

So far, so good. This is arguably the best sequence in the movie. It’s exciting, propulsive, and well shot. Wayne is re-traumatized by seeing the deaths of his people, including the mother of a small girl. He’s enraged by the cluelessness of this klutzy Kryptonian. Plus, he says about Superman that, “He has the power to wipe out the entire human race and if we believe there is even a one percent chance that he is our enemy, we have to take it as an absolute certainty.” Way to channel your inner Dick Cheney, Bats.

18 months later, we learn that industrialist and brogrammer Lex Luthor (Jesse Eisenberg) is also super mad at Superman. Why? Ah…I’m not sure, exactly. There’s a throwaway line about young Lex getting knocked around by his dad, but the movie never adequately explains why he has such a mad-on. Luthor is hunting for kryptonite, and he attracts the attention of the Batman. Gotham City and Metropolis are sister cities here,** and when Bats isn’t scaring the bejeezus out of the criminal underworld, he’s investigating Luthor and preparing for war with the Man of Steel. The guy is good at multitasking, I’ll give him that. His faithful butler Alfred (Jeremy Irons) provides tech, tactical, and emotional support. Also, seemingly out of nowhere, Wayne starts having strange visions and prophetic dreams. Why? Because reasons, apparently.

Meanwhile, Clark Kent spends his time living with rockstar journalist Lois Lane (Amy Adams), working for The Daily Planet, and wrestling with what it means to be a hero. Kent is investigating the Bat of Gotham, and they’re on a collision course. Along the way, both heroes will encounter Diana Prince/Wonder Woman (Gal Gadot), on a mission to retrieve a mysterious photograph, also because reasons.

As you may have guessed, there are a plethora of subplots to deal with. Do they get paid off in a satisfying fashion? Sorry, no. I won’t say there are plot holes. Rather, there are plot canyons, where unwary narrative disappears, never to be seen again. For example…why is Lex Luthor providing experimental bullets to mercenaries? Why does he genetically engineer the unkillable creature Doomsday when he has no way to stop it? How is it Clark Kent hasn’t gotten fired, considering he constantly ignores the orders of editor Perry White (Laurence Fishburne)?

But before I really start ranting, let’s take a moment to talk about what works. First and foremost, Ben Affleck is outstanding. He’s the definitive big-screen Batman. Remember the old days of Michael Keaton lumbering around in a hard rubber suit? This Batman is fast, agile, and able to beat the hell out of two dozen bad guys on his own. This is also one of the first times we’ve seen the Dark Knight bothering to be a detective. He makes deductions, works leads, and whatever room he walks into, he’s the smartest guy in it. Affleck has the gravitas to pull off the obsession and anger, the intelligence to make for a believable leader of a future Justice League, and the humor to shift from a brooding vigilante to a dim-bulb playboy. This Batman deserves a better movie around him, and I hear that Affleck has signed on for more films. That’s great news.

Affleck has terrific chemistry with Jeremy Irons. His Alfred is crusty and sarcastic, but there’s real affection between the two of them. Despite having virtually nothing to do beyond looking gorgeous and kicking ass, Gal Gadot is a great pick for Wonder Woman. During the battle with Doomsday, the CGI beast swats her down. Before standing up, she smiles, a grin saying So it’s like that, huh? With her musical Israeli accent and confident physicality, she’s someone who will never need saving.

Unlike walking plot device Amy Adams, who constantly needs saving. Lois Lane exists to be put in peril, make goo-goo eyes at Clark, and magically know key pieces of information. Jesse Eisenberg as Lex Luthor is, in a word, awful. Eisenberg is a smart and creative actor, but this is one of the worst performances I’ve ever seen. His Luthor is a twitchy motormouth who seems to be making it up as he goes along. Lex Luthor is supposed to be a guy with a massive intellect and even more massive ego. He has schemes within schemes. This Lex Luthor doesn’t have anything approaching an evil plan. He just…does things, sets up machinations that don’t pay off or go anywhere.***

Henry Cavill fares no better. He deserves better since he’s a magnetic performer with a thousand-watt grin. Unfortunately, he smiles maybe three times in the entire movie. Putting it simply, this version of Superman is a little bit of a dick. He’s mopey and a little surly. You can’t blame him, considering everybody in the movie talks about what Superman means, but Superman himself never gets a chance to weigh in. He even gets screwed over in a scene where Congress has called in Superman to explain himself. It’s a set up for a rousing monologue, for the Man of Steel to say his piece. Unfortunately, that moment never happens.

Why is Batman v. Superman such a problem? Part of it is the overstuffed script by David Goyer and Chris Terrio. With the Marvel movies, 5 films laid the groundwork and provided character development before getting to The Avengers. But Justice League Part One is scheduled for next year, so this film has to do an enormous amount of setup, along with providing something approximating a story between Batman and Superman. It’s doing too much too fast, and as a result, not much feels organic or natural.

But director Zack Snyder is the main culprit. Snyder is an excellent visual stylist, and he’s made films like Watchmen and 300 that are solid pieces of entertainment. But Snyder is a problem for a couple of reasons. First, he’s not what you’d call thoughtful in his filmmaking. Iconic scenes happen randomly, and dialogue is cribbed from better works like The Dark Knight Returns. Snyder just throws in moments because they look cool, not because they serve the story. Can you imagine what thoughtful filmmakers like the Wachowskis would have done with this?

More troubling is that Snyder seems like he doesn’t believe in the concept of Superman. Snyder goes full grimdark, with a Batman who brands criminals and kills without compunction. Colors are washed out, most scenes take place at night, and there’s a constant feeling that a snotty 15-year-old was given a $250 million budget. Superman and Batman facing off is intriguing is because it’s a clash of light versus dark, sunny optimism pitted against gloomy pessimism. Snyder seems to think Superman is hopelessly outdated, so we have a hero that’s dark and brooding battling a hero that’s even darker and broods more.

A few years back, DC Comics published All-Star Superman, a miniseries written by Grant Morrison and illustrated by Frank Quitely. Morrison’s goal was to update the character while emphasizing his more timeless characteristics. There’s a scene where, in the midst of chaos, Superman overhears a phone call between a therapist and Regan, a young woman on the verge of suicide. Superman speeds to the scene. He sees her on the roof of a skyscraper, mascara streaking her face, as she looks at the long drop below. She’s preparing herself. Superman appears behind her, gently placing a massive hand on her shoulder. He says, “Your doctor really did get held up, Regan. It’s never as bad as it seems. You’re much stronger than you think you are. Trust me.” Regan turns and embraces him, his cape enveloping her. It’s a beautiful moment.

Those moments of kindness are what truly define the character. Kindness is critical, particularly in these cynical and self-obsessed times. It’s a virtue that should be celebrated, not sneered at. Superman is our greatest hero, and he deserves better.

*Does every director want to put their own stamp on Bruce Wayne’s parents getting iced? Soon, we’ll see the Waynes get blown away in every movie, even if it has nothing to do with Batman.

**This movie kicks so much ass when it comes to missed opportunities. If Gotham and Metropolis are sister cities, why not show how the characters of the city mirror their respective heroes?

***I think I’m a reasonably smart guy, but I have no idea what Luthor’s endgame is. If anyone can cohesively explain his master plan to me, and not just say that he’s crazy, I’ll bake you a pie. It may not be a good pie, but it’ll be free.