The Skeleton Twins is an iceberg. Hold on, lemme explain.

A good movie doesn’t throw buckets of information at you right away, drowning you in exposition. A good movie inserts just the right amount of mystery, which creates tension, which leaves you intrigued. You watch intently because you need to have your questions answered.

The Skeleton Twins does just that. It plays like snippets of a much larger story, with a rich history that we’re only meant to guess at as the movie unfolds. Little bits of info surface at key moments, but the majority remains left unsaid. That brand of subtlety and evasiveness make for good cinema. 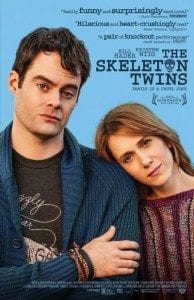 After ten years of estrangement, siblings Milo and Maggie Dean (SNL alumni Bill Hader and Kristen Wiig) reunite because Milo tries to commit suicide. As a result, the depressed Milo comes to live with Maggie in their hometown. You can probably already guess that this sounds just like a generic getting-a-new-lease-on-life kind of movie, and it could have easily devolved into that.

What keeps it from becoming lost in quirky dramedy land is the groundbreaking performance of Bill Hader. I had no idea Stefon had this kind of range and intensity. Every minute of his screen time is used to great effect, and he makes the movie something special.

Kristen Wiig is passable as Maggie, but she doesn’t quite have the dramatic acting chops to stand out. Good guy Luke Wilson is effective as Maggie’s grown-up frat boy husband. Who doesn’t want Luke Wilson to succeed? He’s just one of those guys you can’t help but root for.

Sure, The Skeleton Twins contains some cheesy paint-by-numbers plot beats, like the Sibling Lip-Syncing/Dancing scene. The Looking Through A Box of High School Memorabilia Scene. And the ending is a bit trite and predictable, but by the time you get there, it doesn’t matter.

The Skeleton Twins is now playing at Boulder Century Theatre