The Blind Way or the Highway 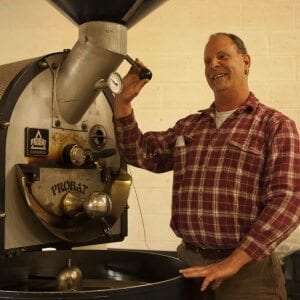 Owner Gerry Leary alongside his coffee-roasting friend (via google)

For someone who cannot see, Boulder‘s Unseen Bean Coffee Shop owner of twelve years, Gerry Leary, has incredible vision. The art of Leary’s blind roasted coffee production stemmed from a San Fransciscan coffee shop decades ago, upon discovering the foreign noise of a coffee roaster. With greater insight, deep exploration and thorough tutorials, Leary resigned his profession in car mechanics to something he discovered requires merely “a timer and a thermometer to do this right” (Leary). Despite the vast population claiming one must see the color of the bean to produce good, proper coffee, Leary took it upon himself to prove the quality of the unseen bean and thus his Boulder baby was born.

The Unseen Bean radiates endurance, perserverance, and resilience. One of the reasons Leary is successful is because he challenges what success means. It’s not about money. It’s about the people, the product, and the process. He simply reflects, “I’m here, I’m happy.” He doesn’t expect to be able to do it alone and claims that the key to success is “good help and persistence.” Leary is not afraid of making mistakes; he expects them. He says, “Everyone I talked to said blind guys can’t roast coffee. Whether you work for yourself or someone else, you have to figure out what you’re good at and what you’re not good at. If you put that off you’ll fail, unless you figure out how to do the things you can’t do.” Leary expresses the difficulty of running a business without sight with regard to paperwork, aesthetics and design. He attributes much of his success to manager Kimme Seufert who took over at age eighteen, crediting that the “decor, coloring, menus…all her. And that’s a self-motivated woman.” It’s no secret this place eminates a loving, family feel. It exceeds the expectations of any typical coffee shop, because each cup holds a story that cannot be duplicated.

The Unseen Bean is quaint, cornered and cozy. Being in Boulder, what’s talked about is what succeeds, and Leary speaks to depending on word of mouth for business. It’s no subtle feat to have a successful coffee shop in Boulder, where people “are interested in the art of coffee, the way it’s brewed and how it’s made with different beans” (Leary). Leary inquires, “I don’t know that it’s that way in other communities,” and that is what makes Boulder beautiful. It’s the quiet characteristics that define a population; the quirks that compose topics of conversation. Leary knows that Boulder is statistically known for startups and refers to us as an “economic bubble.” He says “there’s a lot of competition but there’s a lot of confidence,” and that’s why he and his customers jive so well. 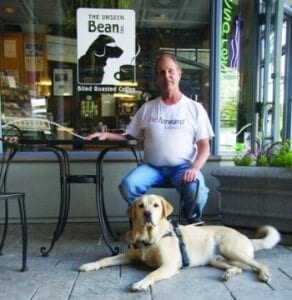 Like any startup, The Unseen Bean has had it’s hiccups: it’s taken eight years for tax resolve, six years to find proper management and twelve for Leary to get a paycheck; but it’s not all for nothing. There is no place like this place, period. Leary claims that the exchange of giving and sharing passions offers him “more power than anything…Success is when I can communicate and interact with people in my life. That’s all on the positive side of zero. You’ve got to be sensitive about where the water flows; don’t worry about why” (Leary).

There’s no hiding here, only respect for reality. Gerry Leary may not be able to see, but in many ways he sees more than most. He translates what makes Boulder best, into bitter-less coffee. There is no more love that could reside here and yet they continue to transcend the threshold. The Unseen Bean is everything that Boulder is and what a gift it would be to them for us to support it. Go see for yourself, both the seen and the unseen, at The Unseen Bean in Boulder. #blindroastedcoffee #forthewin