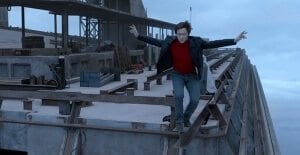 During the construction of the Twin Towers in New York City, many people were less than thrilled with the design. Critic Lewis Mumford wasn’t impressed, writing that the World Trade Center, “…is a characteristic example of the purposeless giantism and technological exhibitionism that are now eviscerating the living tissue of every great city.” Don’t hold back, Lewis, seriously.

The Twin Towers were opened April 4, 1973, to much fanfare. New Yorkers sighed and tried to get used to the gigantic monoliths now in their midst. But on August 7, 1974, sometime after 7 AM, hordes of pissed-off commuters witnessed the miraculous. They saw what appeared to be a man suspended in midair between the tops of the towers. Upon closer inspection, they saw that the man had somehow managed to install cable between the corners of the North and South Towers. He was performing a high-wire walk, 1,350 feet above the ground.

The man performed for about 45 minutes. He crossed along the wire 8 times, and at certain points he also knelt, danced, lay down upon the wire, and saluted the crowds. The walker was professional high-wire artist and insane French person Philippe Petit. After he concluded his performance, he was taken into custody by the fine people of the NYPD. They asked him why he did it, and he responded with, “It was something that had to be done, and I couldn’t explain it…it was a calling of the romantic type.” Everyone loved this guy. Literally, everyone.

It’s fair to say that this was a unique event, one that can never be repeated. It catapulted Petit into the status of folk hero. It created a moment of art and magic for a city that has no time for either. Perhaps most notably, it transformed a couple of butt-ugly monstrosities into beloved icons of the New York skyline. 27 years later, those towers would be seared into the American consciousness. Many of us remember them with some degree of sadness and loss. Robert Zemeckis prefers to remember the magic, and his film The Walk celebrates Petit’s artistic lunacy. As a theatrical experience, it’s jaw-dropping, astonishing. As a movie…it’s pretty good.

The Walk introduces us to Petit (Joseph Gordon-Levitt), working as a street performer in France. We see him seize upon the idea of performing the greatest wire walk known to man. He calls his plan “the coup,” and he requires a team to help him pull it off. There’s Annie (Charlotte Le Bon), a gorgeous musician that Petit pursues with all the subtlety of Pepe Le Pew. There’s his mentor Papa Rudy (Ben Kingsley), a crusty old veteran of circuses and high wire acts. There’s numerous others, an international team that assembles to bring Petit’s mad vision to life.

Zemeckis, along with co-screenwriter Christopher Browne, have taken a cue from the outstanding 2008 documentary about Petit, Man On Wire, and they’ve essentially made a heist film, with set-ups, setbacks and payoffs. But to get to that, you need to make it through the weakest section of the film, the first 30 minutes. We see a sepia-toned Paris, strolling lovers along the boulevards, and Petit as a Manic Pixie Dream Frenchman. Gordon-Levitt dances, prances, grins winningly, and offers bon mots of wisdom. It’s a section that is oppressively and aggressively whimsical, like being punched in the face by a mime. I think it’s also necessary, in order to properly get us into Petit’s head before he undertakes the coup. The real Petit is exactly like this, simultaneously magical and annoying, and Gordon-Levitt captures him perfectly. But at times, Zemeckis lays the twee on a bit too thick.

Once the movie gets to New York and the plan gets moving, the film takes off. It’s hugely entertaining watching this band of goofballs scam their way into the Twin Towers, and doing with looks of, “Can you believe we’re getting away with this?” And the last 45 minutes of the film, when the walk itself takes place…guys, do yourselves a favor and see this thing on the biggest friggin’ screen you can find. I saw it in IMAX 3-D, and there’s a shot where Petit first steps onto the wire. It’s a point of view shot, looking straight down, the wire bisecting the frame. Petit watches his feet carefully move, one in front of the other. The effect, along with the faint sound of the city below, is terrifying.* I had a physical reaction during the walk initially, with my fists clenched and sweat beading on my face. After a few minutes, though, I broke through it. I felt a tranquility and a very real sense of peace.** The entire sequence is masterfully done, and the FX work creates a very real and tactile feeling of weight. It almost feels like the towers are back.

The film isn’t perfect. Along with the cloying sentimentality of the first act, Zemeckis has Gordon-Levitt delivering narration that’s counterproductive and obvious. It’s almost like he’s trying to convince us to see the movie we just paid for, with lines like, “To walk on the wire, this is life!” The idea of “show, don’t tell” isn’t always necessary or correct. The right narration can enhance the images you’re seeing and create something incredible.*** Here, the movie is trying to hype itself, which gets in the way of more natural moments. While Gordon-Levitt has the right physicality and intensity for the role, his accent is…let’s say, problematic. Remember the obnoxious Frenchmen in Monty Python and the Holy Grail? It’s kinda like that.

So while there’s issues, the film ultimately works. It’s got boundless optimism and a soaring feeling that, with the right amount of passion, literally anything is possible. Zemeckis has made a film that’s a dream of New York. Rather than dwelling on the nightmare of 9/11, he chooses to focus on that transformative moment in the lives of the towers when New York first fell in love with them.

*If you’ve got acrophobia, a fear of heights, there’s a good chance that this movie will make you die of fright. Consider yourself warned.

**Yes, it’s hugely manipulative. All movies are, and this manipulation was so well done that I didn’t mind it.

***Unless we’re talking about the narration in Blade Runner, which is godawful.

Tim Brennan
Tim has been alarmingly enthusiastic about movies ever since childhood. He grew up in Boulder and, foolishly, left Colorado to study Communications in Washington State. Making matters worse, he moved to Connecticut after meeting his too-good-for-him wife. Drawn by the Rockies and a mild climate, he triumphantly returned and settled down back in Boulder County. He's written numerous screenplays, loves hiking, and embarrassed himself in front of Samuel L. Jackson. True story.
See More Articles From Tim Brennan
Tagged: ben kingsleycharlotte le bonchristopher brownejames badge dalejoseph gordon-levittrobert zemeckisthe walk
Boulder Colorado Air Quality