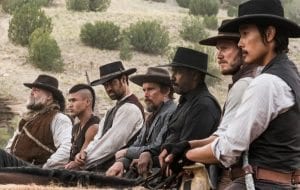 My wife hates Westerns, which is a pity. Sure, there are a couple of unassailable classics she likes, like Tombstone or Unforgiven. But those are the exception. She made it through just 10 minutes of Open Range, scoffed at the idea of watching Silverado, and physically left the room when High Noon came on. Thing is, she’s not the only one.

I know a lot of people that instinctively recoil at Westerns. Of people I know, Westerns seem to be the second most despised movie genre, with superhero movies taking the crown. Why is that? My wife couldn’t quite articulate it, there’s just a certain indefinable something about oaters that drives her crazy.*

Good thing she didn’t come of age earlier. Back in the day, Westerns were the dominant film genre. Literally, thousands of them were made, and a guy like John Wayne could become an icon by looking good on a horse. But, like with all things, the world moved on and Westerns became largely ignored. These days, you hardly see any of them being released. Once in a while, a good one will slip out, like the solid remake 3:10 To Yuma or the excellent horror-Western Bone Tomahawk. Now, The Magnificent Seven is in theaters. Is it going to usher in a 21st-century renaissance of dudes blasting other dudes with six-shooters? Hell, no. But it’s okay, nonetheless.

We’re introduced to the tiny town of Rose Creek. Not far away is a mine, owned by the extravagantly named Bartholomew Bogue (Peter Sarsgaard). Bogue is a corrupt tycoon, who thinks nothing of exploiting the workers for his own personal gain.** He’s decided to steal the land from the downtrodden citizens of Rose Creek. So, as so often happens, he interrupts a community meeting at the town church with a group of hired guns in tow. He gives a weird-ass speech about capitalism while shoving a kid’s hand into a jar of dirt. One of the townsfolk heroically stands up to Bogue, and he gets blown away for his trouble.

The man’s widow is the steely Emma (Haley Bennett), and she wants retribution. However, considering that she’s surrounded by a group of ineffectual clodhoppers, she knows she’ll need to seek outside help. Luckily for her, she meets the bounty hunter Sam Chisholm (Denzel Washington) and offers him a sack of swag to defend the town. Chisholm is handy with a sidearm, but he’s just one man. In order to fight back, Chisholm assembles a team. They are…

Now, the titular Seven must come together and figure out a way to defend the town from a massive army.

Perhaps you’re thinking that the plot description sounds strangely familiar. It’s not just because this film is a remake of 1960’s The Magnificent Seven, which was itself a remake of 1954’s Seven Samurai. It’s because the “a group of disparate people must team up to defeat a common enemy” trope is one of Hollywood’s favorites. The Avengers did it. Galaxy Quest did it. Ocean’s Eleven did it. You could easily come up with a dozen examples. It’s okay that it feels familiar. The trick is, either the characters need to be interesting enough for us to give it a pass or the twist on the trope needs to be unique enough that we want to take the journey.

Here’s the thing. The Magnificent Seven is…fine? I suppose? Yeah, I enjoyed it, and it scratched the Western genre itch. You’ve got all the standards here. Pointlessly fancy gun spinning and pointlessly fancy card tricks. The authoritative clump clump clump of cowboy boots on a wooden floor. A metric ass-ton of horses. Director Antoine Fuqua keeps things moving along, and there are a couple of really well-shot gunfights and extended action sequences. Fuqua is a dependable filmmaker, but the only film of his where he really made the material soar was Training Day. This film is a perfectly fine Western, and it never aspires to be anything more than that.

The script by Richard Wenk and Nic Pizzolatto does him no favors. The characters aren’t three-dimensional. Hell, they’re barely even two-dimensional. Peter Sarsgaard’s Bogue is a shifty villain. Martin Sensmeier’s Red Harvest is a noble savage. They’re never defined as human beings, and they very rarely have thoughts, feelings, or opinions. They’re just defined by what they do, and that means we never get to really care about them. As a result, the script never inspires the director to greater heights.

It irritates me that a cast this talented is stuck with a script this lazy. Still, they play to their strengths. You will not be surprised when I tell you that Denzel Washington plays a guy that’s competent and a natural leader, or that Chris Pratt plays an amusing rogue. Everybody in the cast plays a role you’d expect the way you’d expect it. They all do well, but there’s not much in the way of surprises. Even the great Vincent D’Onofrio, who was so impressive on Netflix’s Daredevil as Wilson Fisk, plays his tracker Jack as a generic weirdo. He’s fun to watch with his high-pitch squawk of a voice, but D’Onofrio deserves better. They all do.

There’s a certain phrase used about some movies that absolutely drives me crazy. You know the ones, movies called “time wasters.” These are the kinds of movies designed to be watched on a rainy Sunday morning. They require no heavy lifting on the part of a viewer, and they seem to be purely forgettable product. The Magnificent Seven is exactly that. If you’re looking for a fun time out at the movies, you’ll get that. I’m just not sure you’ll remember much afterward.

**Too bad there are no real-life parallels to be drawn here.

Tim Brennan
Tim has been alarmingly enthusiastic about movies ever since childhood. He grew up in Boulder and, foolishly, left Colorado to study Communications in Washington State. Making matters worse, he moved to Connecticut after meeting his too-good-for-him wife. Drawn by the Rockies and a mild climate, he triumphantly returned and settled down back in Boulder County. He's written numerous screenplays, loves hiking, and embarrassed himself in front of Samuel L. Jackson. True story.
See More Articles From Tim Brennan
Tagged: antoine fuquabyung-hun leechris prattdenzel washingtonethan hawkehaley bennettmanuel garcia-rulfomartin sensmeierpeter sarsgaardvincent d'onofrio
Boulder Colorado Air Quality